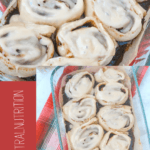 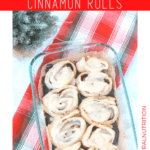 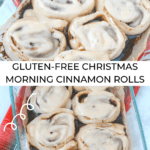 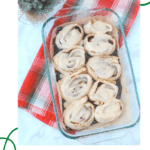 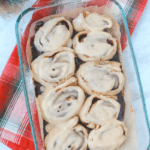 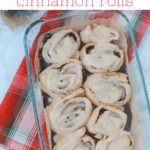 These are absolutely the BEST gluten-free cinnamon rolls! I’ve been making cinnamon rolls every Christmas morning for ten years and this is by far the best recipe I’ve tried!

I feel like there is nothing I can say that will accurately do this recipe justice. But I still have so much to say about this recipe.

First, I am not a sweets person. 10 out of 10 times, I’ll order a glass of wine instead of dessert. I’ll take chicken liver over chocolate any day.

But cinnamon rolls are one of my weaknesses.

I have always loved them – the gooeyness in particular. The gooey frosting, the gooey cinnamon center, the gooey dough. I now realize gooey is a gross word so I’m going to stop using it now.

But do you SEE the gooey cinnamon caramel on the bottom? Something about the combo of butter, coconut sugar and cinnamon just melts into the dough and the bottom is covered in this crazy good sauce. I can’t even explain it.

So listen, I’ve been trying to make a gluten-free cinnamon roll recipe for years. I’ve used paleo recipes, gluten-free recipes, keto, sugar-free and all recipes in between.

And to be honest, they all sucked.

A big difference with this one is the added use of yeast. You need yeast for that fluffy, gooey dough.

And trust me, after ten years of exiperimentation – these are the best gluten-free cinnamon rolls. I’m sure others are comparable, and some are SUPER complicated. But that’s not my cooking style.

They’re just so perfect for Christmas morning. Look how beautiful they are! 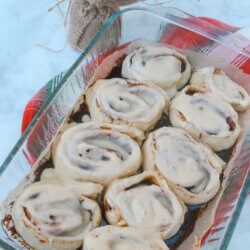 For the cinnamon filling:

OR for cream cheese frosting with maple syrup:

Tried this recipe?Let us know how it was!
0