Learn how eating a healthy anti-anxiety diet and cutting out these three foods entirely can help reduce anxiety naturally.

I’ve detailed my struggle with anxiety over the years on this blog.

Despite living a healthy lifestyle, it’s still something I struggle with and still something that I need to heal. And I truly believe I will heal and release my body from anxiety.

I go through long periods when I have no anxiety issues at all. But because anxiety has crept back into my life, I’m attacking in from all angles:

In this article, I want to focus more on the dietary aspect of healing anxiety.

Cutting out these three foods helped me reduce my anxiety naturally!

These are the foods I’m avoiding entirely because they disrupt proper gut function, cause inflammation and are not healthy for the brain.

I notice that when I eat this food, my anxiety is much worse.

These days, most people avoid gluten because they think it will make them gain weight, which isn’t necessarily untrue.

But science is just beginning to explore the gut-brain connection, or how the gut affects the brain and vice versa.

“The brain has a direct effect on the stomach. For example, the very thought of eating can release the stomach’s juices before [the] food gets there. This connection goes both ways. A troubled intestine can send signals to the brain, just as a troubled brain can send signals to the gut. Therefore, a person’s stomach or intestinal distress can be the cause or the product of anxiety, stress, or depression. That’s because the brain and the gastrointestinal (GI) system are intimately connected — so intimately that they should be viewed as one system.” (emphasis mine)

Gluten has been directly linked to anxiety.

The Maryland Psychiatric Research Center at University of Maryland School of Medicine found that,

“Various types of anxiety are associated with gluten intolerance. One study found that CD patients were significantly more likely to have state anxiety when compared to controls[,] and that after 1 year on a gluten-free diet, there was a significant improvement in state anxiety symptoms [31]. Other anxiety disorders such as social phobia and panic disorder have been linked to gluten response. Addolorato and colleagues [39] reported that a significantly higher proportion of CD patients had social phobia compared to normal controls. Additionally, a higher lifetime prevalence of panic disorder has been found in CD patients [33] and new studies have confirmed the increased association between CD and anxiety [40].” Source

Researchers have also found that children born to mothers with high levels of antibodies to gluten have almost double the risk of developing a psychiatric disorder later in life.

This is not exclusive to schizophrenia.

Research suggests that 22% of those with celiac disease will develop some form of a neurological or psychological disorder; while as many 57% of people with neurological dysfunction test positive for anti-gliadin antibodies.

And because I know anxiety and depression often go hand in hand, it’s been linked to that as well.

“Ruuskanen et al. [42] found that an elderly population with gluten sensitivity was more than twice as likely to have depression when compared to the elderly sample without GS. Corvaglia et al. [43] have described [the] improvement in depressive symptoms following a gluten-free diet.” Source

Gluten is not only difficult to digest, but it’s also very inflammatory.

Both of these things contribute to anxiety. While many people do not have an allergy to it, it’s still not a health food.

There is not a single nutrient in gluten that cannot be obtained from a vegetable. Just because an allergy or even sensitivity is not present, does not mean this food shouldn’t be avoided.

If someone suffers from anxiety or depression, it may help to eliminate it for at least 30 days. And it definitely won’t hurt to try!

When I refer to vegetable oils, I’m referring to the following:

I am not referring to coconut oil, avocado oil or sustainably sourced palm oil, to be clear.

There are several reasons to avoid these oils if you are struggling with anxiety.

First, many of them are predominantly genetically modified. Particularly corn, canola, and cottonseed oils.

Majority of these crops grown in the US are genetically modified, upward of 90% actually. GMOs can cause intestinal permeability, further damaging the gut.

So that’s the first reason to avoid these oils.

Second, they are extremely inflammatory.

The omega-3 to the omega-6 ratio in these oils is terrible. They’re extremely low in omega-3 and extremely high in omega-6, which leads to rampant inflammation of the body and brain (and it’s also terrible for your heart – FYI).

Basically, this stuff is the opposite of brain food.

If you suffer from anxiety, it’s best to eat an Anti-Anxiety Diet rich in anti-inflammatory foods that support the brain.

Vegetable oil isn’t the only food we should cut out on an anti-anxiety diet. Sugar is just as bad for inflammation.

In a 2008 study, rats that binged on sugar and then fasted displayed anxiety, and in a 2009 study rats fed sucrose compared to high-antioxidant honey were more likely to suffer anxiety.

Not only that, but it feeds the harmful bacteria in the gut, causing them to proliferate and overgrow.

A proper balance of gut bacteria is necessary for a balanced mood (and a healthy gut, and regularity, and immune system, and focus, and…you get my point?).

A recent study at UCLA demonstrated that yogurt intake could positively affect brain function, feelings of anxiety in particular. According to the researchers,

“Four-week intake of an FMPP [fermented milk product with probiotic] by healthy women affected activity of brain regions that control central processing of emotion and sensation.”

“Such findings offer the tantalizing possibility of using beneficial, or probiotic, bacteria to treat mood and anxiety disorders—either by administering beneficial microbes themselves or by developing drugs that mimic their metabolic functions. The new research also hints at new ways of managing chronic gastrointestinal (GI) disorders that are commonly accompanied by anxiety and depression, and that also appear[s] to involve abnormal gut microbiota.” Source

So symptoms of anxiety can be caused by a poor diet? How interesting is that?!

So should we all focus on eating an anti-anxiety diet instead of reaching for a band-aid solution (pills)?

This much I can tell you:

If you’re eating foods that disrupt gut function, that will lead to anxiety, depression and other mood disorders.

If you suffer from any of these, it may be worth eliminating them for at least 30 days to see if your mood improves on an anti-anxiety diet.

And because these foods are not necessary for any diet and harmful to so many other aspects of the body, you may find you’d like to keep them out of your diet forever. 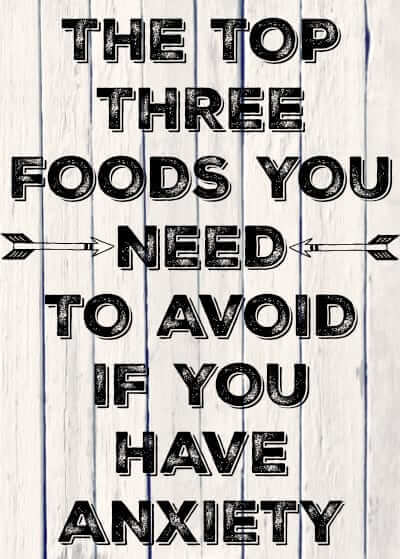 Which foods cause anxiety?

Many foods can cause and/or exacerbate anxiety, particularly gluten, sugar and vegetable oils. Additionally, any foods you may be sensitive or allergic to can trigger an anxious reaction.

Is sugar bad for anxiety?

Yes. Sugar both feeds unhealthy gut bacteria and causes blood sugar spikes, which can feel like symptoms of anxiety.

Is gluten bad for anxiety?

Yes. Gluten has been linked in numerous studies and clinical trials to symptoms of anxiety, depression, even schizophrenia.

Are vegetable oils bad for anxiety?

Yes. Vegetable oils are inflammatory and high in omega-6 fatty acids. A high omega-6 consumption and/or inflammation have both been linked to anxiety and depression.

Can diet cause anxiety?

Yes. Numerous studies and clinical trials have demonstrated diet’s ability to both cause and alleviate symptoms of anxiety and depression.