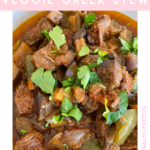 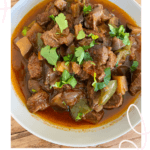 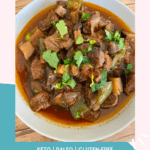 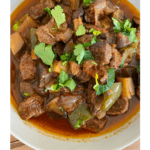 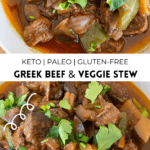 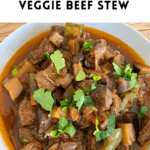 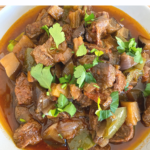 I like crockpot meals. They make my life easier. I can throw a bunch of stuff in a pot and take my kids to the park and come home a few hours later and BAM.

Dinner is ready. Usually I “forget” a snack and my kids are so hungry they eat it.

By forget I mean I don’t bring snacks so that I don’t have any when my kids ask for some.

It’s okay for kids to get hungry. It’s good for their digestion and for the amount of food they eat, aprticularly as designated meal times.

I’m not against snacks, but I AM against snacking all damn day, which seems to be the norm with kids these days.

My son has breakfast at 8am, goes to school, has a snack at 10 and lunch at 11:30. WHY does he have a snack at 10am? I don’t know. They give the kids snacks at school, because four year-olds can’t go more than two hours without eating I guess?

Don’t give your kids more than one snack a day (ours is usually around 3pm) and see how well they eat.

Make this Crockpot Beef & Veggie Greek Stew. It’s really good. And also you can basically throw anything you have into the crockpot, which is essentially what I did. 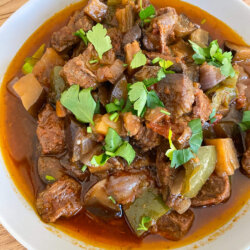 Tried this recipe?Let us know how it was!
0