Much of this information is pulled directly from my upcoming ebook on how to eat like your ancestors for glowing skin, beautiful hair and radiant health. We cover so many nutrition lies in that one.

Make sure you’re signed up for my newsletter for the details!

Fat is bad, fat will make you fat, fat will give you heart disease.

I have a serious love for fat, butter on my broccoli, grass-fed gouda with prosciutto, coconut cream with raspberries; the list is endless. But somewhere along the way, we were scammed.

We were told that fat is public enemy number one, and we believed it. So how were we duped?

Ancel Keys was an American scientist who conducted the Seven Countries Study in 1958. The study examined the correlation between cardiovascular disease and the dietary intake of fat.

Here is the graph he used to support his theory: 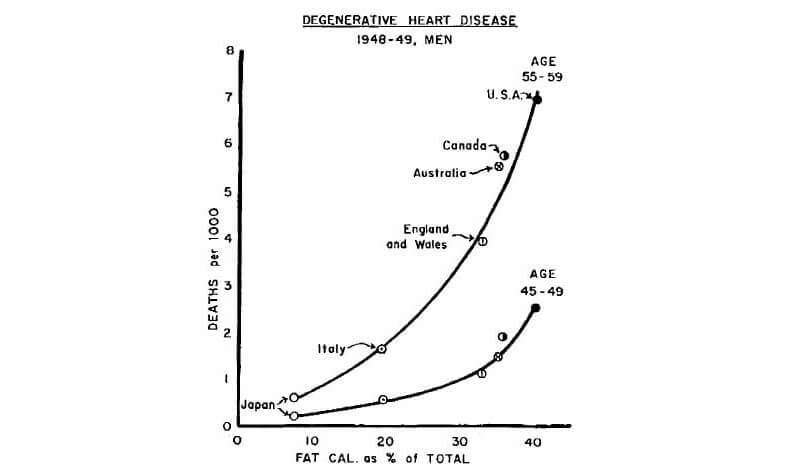 And here is the actual graph: 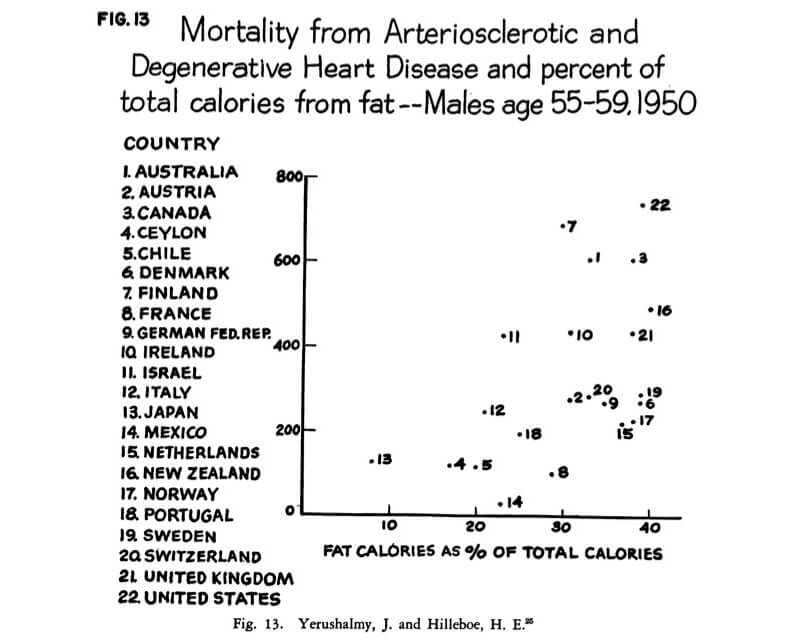 Grains are good, grains should make up the majority of your diet.

I don’t mean to come off as a played out grain-hater. I even eat small amounts of white rice (find out why white rice is healthier than brown rice HERE). And I think if you’re going to eat grains, that eating sprouted grains once in a while isn’t the end of the world.

But we have been told time and again that grains are healthy, that grains should be the basis of any healthy diet. Here is partially why this isn’t true.

Grains, unlike most vegetables and meats, are actually equipped with defense mechanisms. Take the berry, for example, it “wants” to be eaten. An animal eats a berry, the seeds are pooped out, those seeds grow. Grains to do not want to be eaten. They are equipped with lectins, phytates, and gluten – all of which are toxic.

Lectins are a group of carb-binding proteins naturally found and particularly concentrated in all grains and legumes. In addition, lectins are highly inflammatory, sticky and bind to the lining of the intestine. This leads to intestinal damage, reduced ability to absorb vitamins and minerals, negatively affects the gut flora and eventually leads to leaky gut.

“Locally, they can affect the turnover and loss of gut epithelial cells, damage the luminal membranes of the epithelium, interfere with nutrient digestion and absorption, stimulate shifts in the bacterial flora and modulate the immune state of the digestive tract. Systemically, they can disrupt lipid, carbohydrate and protein metabolism, promote enlargement and/or atrophy of key internal organs and tissues and alter the hormonal and immunological status.” Source

The gut wall has been damaged, allowing undigested food particles and toxins to enter the bloodstream, along with yeast, fungi, pathogens, etc. If you experience any of the following symptoms, you may have leaky gut:

Phytates are anti-nutrients found in grains and legumes. Phytates, or phytic acid, binds to minerals like zinc, copper, iron, magnesium, niacin, and calcium, preventing them from being absorbed.

A diet high in phytates will eventually result in nutrient deficiencies and can lead to osteoporosis and rickets. This is less common in adults, but is a very real risk, especially for children. Eating phytates regularly and over a period of time, even if you’re an adult can lead to serious health risks.

GMOs are safe, GMOs produce more yields, GMOs will save the world.

No, no and no. GMOs have not proven to be safe or effective. GMOs are genetically modified organisms that have been genetically manipulated to withstand the spraying of RoundUp. The main ingredient in RoundUp is glyphosate. The Institute For Responsible Technology reports that glyphosate:

Genetically modified food has been linked to infertility, cancer, aggression, allergies and even tumor growth. 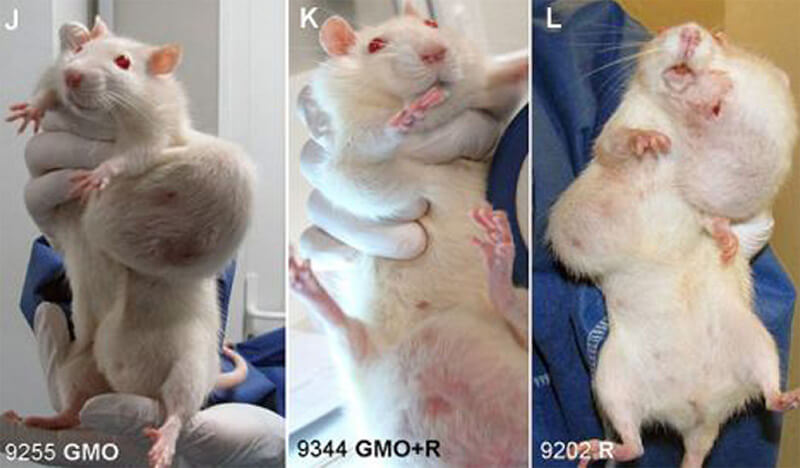 But GMOs will help feed a growing population, right? Wrong.

Even the US Department of Agriculture has said”

GE crops available for commercial use do not increase the yield potential of a variety. In fact, yield may even decrease…Perhaps the biggest issue raised by these results is how to explain the rapid adoption of GE crops when farm financial impact appears to be mixed or even negative. Source

GM seeds do not produce higher yields and are not more environmentally friendly. GM seeds have to be repurchased every season and require more water and fertilizer (both of which are often scarce in third world countries).

Ugh. Poor red meat. How did a health food whose production helped build topsoil and fertilize the earth become vilified and grown with concentrated animal feeding?

The truth is that humans evolved because of our meat consumption – it allowed us to grow bigger brains and a smaller gastrointestinal tract. In addition, our ancestors ate meat and they did so without heart disease, without cancer, without obesity. Meat does not rot in the colon, it is easily digested. It’s also rich in vitamins and minerals.

I remember the day my doctor encouraged my vegan diet as a teen – a diet that robbed me of my health. No one told me I needed to eat animals for B12, true vitamin A, for omega-3s, or that I actually needed the fat we so carelessly vilify.

There are no plants based forms of vitamin B12. B12 is produced in the gut of animals and it is literally impossible to obtain from plants (they do not store it). And really, is this an ideal diet if you can’t obtain necessary vitamins and minerals from your food? I mean, that’s literally the whole point of eating.

I was told I could get omega-3s from flax and chia seeds. Flax and chia seeds are rich in ALA (alpha-linoleic acid), not EPA (eicosapentaenoic acid) or DHA (docosahexaenoic acid), and flax does not convert to EPA and DHA in humans. There are no viable plant-based forms of EPA and DHA, which are necessary for proper brain growth in children.

What do you think of when you hear vitamin A? Carrots? Squash? Other orange colored veggies? The truth is that these contain beta-carotene, not retinol. Retinol is the active form of vitamin A that the body needs. While a small portion of beta-carotene can be converted into retinol, most people are unable to effectively make this conversion.

I wish I had known that these lies were not based on science, history or fact when I was younger.

It would have saved me a lot of trouble. It would save people from obesity, from diseases. Help spread the word about these nutrition lies. And comment below sharing the most ridiculous nutrition lies you’ve been told! 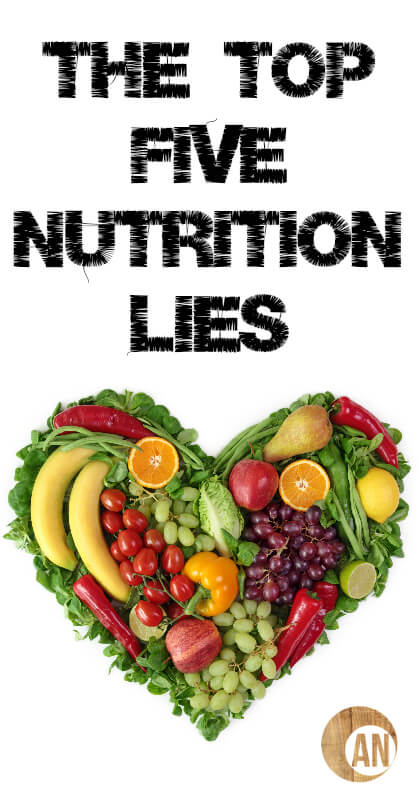