I’m just going to throw this out there: Kashi sucks.

As a brand, as a product, as a health food, they suck. Lately, I’ve been seeing a lot of commercials in which Kashi is touted as an acceptable replacement for an egg, with the tagline “Kashi: as much protein as an egg!” Yeah, and as many processed ingredients as an Oreo. Get it together, Kashi. 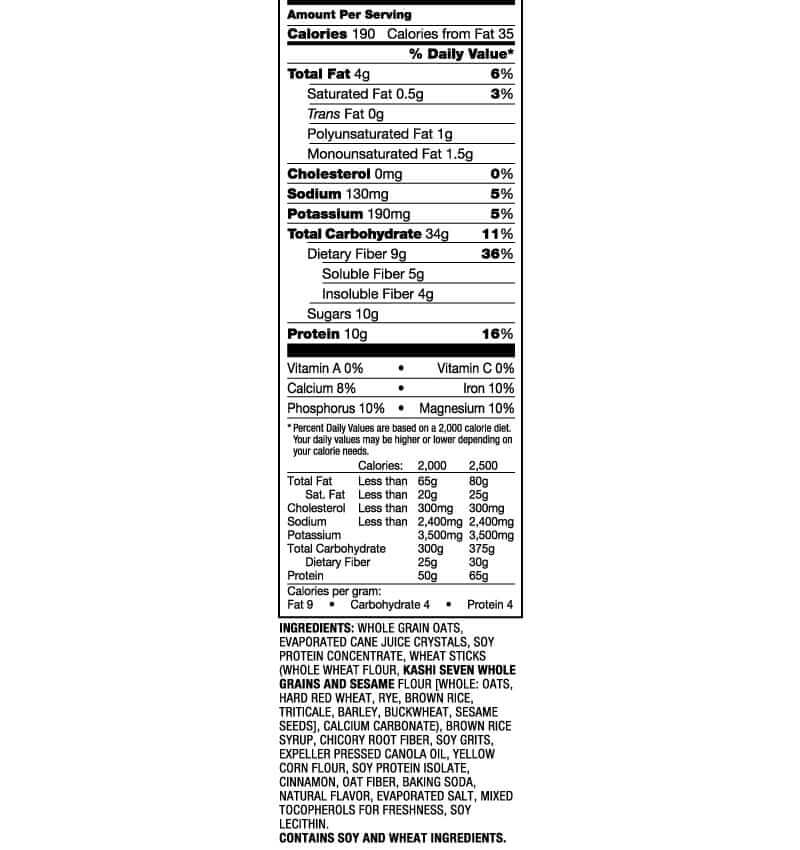 By buying Kashi, you are supporting giant corporations that not only destroy the environment but also put small family farms out of business. By this I mean, you’re kind of a jerk if you buy Kashi.

Soy has a whole host of issues, including a high phytic acid content which blocks mineral absorption, it contains phytoestrogens that mimic estrogen in the body, and drastically lowers fertility in both men and women. You can read more about that here. Soy is one of the biggest nutritional scams introduced to the American public.

Even if it weren’t genetically modified, it is still extremely dangerous. Canola oil is a highly toxic industrial oil. It is low in saturated fat (the good fat) and is extremely high in polyunsaturated fat (PUFA, the fat that will give you heart disease and kill you). It has an extremely poor omega 3 to omega 6 ratio, making it an oil that causes inflammation in the body. I am a huge advocate of the Perfect Health Diet, which emphasizes a low toxin diet. From the Jaminet’s site,

Most Americans consume a large number of vegetable oils in addition to fructose. Fructose from high fructose corn syrup, agave nectar and even from an over-consumption of fruit. America rides an extreme fructose high. Doubled with a diet high in grains, it’s not hard to see how so much of this country is obese.

Kashi is based on 7 whole grains.

Grains naturally carry toxins to protect them from potential threats. These toxins block mineral absorption and damage the lining of the gut. Furthermore, grains spike blood glucose levels, which can lead to insulin resistance (and eventually diabetes). Don’t get me wrong, glucose is necessary for the body, but considering the fact that most Americans are on an extremely high carb diet already, Kashi only adds to the problem. The grains in Kashi are not safe starches (potatoes, taro, white rice, etc) but they are toxic starches.
Now, let’s look at this guy:

Eggs are rich in choline, omega 3s, and vitamins A, E, D and K. No sketchy ingredients, no GMOs, no antinutrients. Cereal grains are hands down one of the most unhealthy food products. They are toxic and useless to the body. Eggs are easily digested, and the nutrients are easily absorbed. Don’t fall for Kashi, it ain’t real food.