Recently Scott and I had our friends Nick and Tasha over for dinner. I made a stupid amount of mashed potatoes because mashed potatoes are delicious and I knew they’d get eaten as a side dish for dinners later in the week (which makes my life a lot easier). I highly recommend making a lot of food at once and storing a portion of it in your refrigerator until you need it. But don’t make too much, like I did. I made a massive amount of mashed taters, to the point where we already had them like, three times as a side dish and I was sick of them. So I turned them into tater pancakes. And they were good. 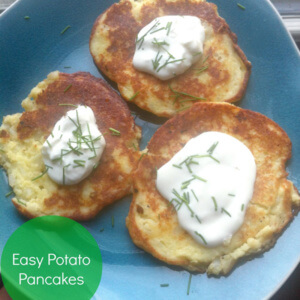 This recipe should give you about 6 pancakes.