I usually start each morning with the healthiest shot ever, which is made with apple cider vinegar and other incredibly healthy ingredients. A lot of people have a hard time ingesting ACV because let’s face it – that’s some sour sh*t. But when mixed with ingredients like lemon, raw honey, and wrinkle + cellulite reducing collagen, it’s actually pretty dang good. 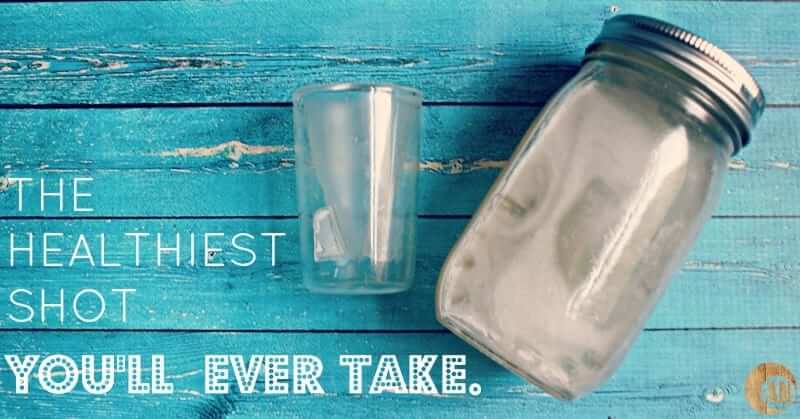 It’s incredibly easy to make a batch of this every Sunday and take a shot of it once a day throughout the week. And I highly recommend giving it a try, because apple cider vinegar is incredibly healthy. Before delving into the benefits of apple cider vinegar, I’d like to emphasize that I only use Bragg’s Apple Cider Vinegar. Bragg’s ACV is “with the mother” which is the dark, cloudy substance you may see floating around in the bottle. Its presence indicates that the best part of that apple has not been destroyed via heat or filtration. A majority of the kinds of vinegar on the market do not contain this and are devoid of the enzymes and minerals that come with the mother. It’s the most nutritious part of ACV and is incredibly beneficial for digestion. Bragg’s may not be the only ACV company that provides this, but they’re the only one I know of. Now, here’s why I drink apple cider vinegar every day!

Some of the worst health advice I’ve heard is to drink a large glass of water either before or with meals to make you feel fuller. This is incredibly stupid for two reasons. Hunger is the brain’s way of signaling that the body needs nutrients. Water does not contain nutrients, so drinking a bunch of water before a meal is useless for eating less. Second, water dilutes stomach acid, which makes it more difficult to digest food and absorb the nutrients from it.

However, regular intake of apple cider vinegar ensures that is stomach acid strong. Many people have weakened stomach acid due to modern day diets rich in sugar, vegetable oils, refined carbohydrates and junk food. You’re not just what you eat – you are what you absorb from what you eat. That salad isn’t going to be very healthy if your body can’t absorb the nutrients from it. Because ACV improves stomach acid, it also improves digestion (source). It’s a good idea to drink (around) a tbsp of ACV in a shot glass full of water about 20-30 minutes prior to a meal. This will improve digestion greatly.

IT BOOSTS THE METABOLISM.

IT’S ANTIMICROBIAL, WHICH CAN HELP KILL OF HARMFUL BACTERIA IN THE GUT.

Apple cider vinegar contains acetic acid and malic acid, both of which are antibacterial and anti-fungal. However, it does not kill off beneficial bacteria but instead the harmful bacteria found in the gut.

IT BOOSTS THE IMMUNE SYSTEM.

You’ve probably heard that majority of the immune system is located in the gut. This is true. A healthy gut is a healthy immune system. Because ACV is great for digestion as well as killing off harmful bacteria, it makes it a 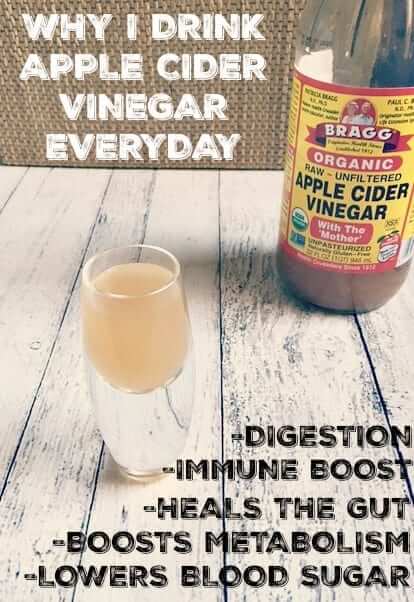 potent immune booster. Not to mention that it contains a variety of acids, specifically malic acid, which is antibacterial and anti-viral.

We are constantly bombarded with toxins, chemicals, and free radicals. This can lead to premature aging, cancer, and degenerative disorders. Apple cider vinegar contains beneficial antioxidants which reduce the effects of free radicals.

If you have issues with blood sugar regulation, or even if you’re diabetic, it may be time to look into apple cider vinegar. Even the American Diabetes Association has studied the beneficial effects of ACV,

“These data indicate that vinegar can significantly improve postprandial insulin sensitivity in insulin-resistant subjects. Acetic acid has been shown to suppress disaccharidase activity (3) and to raise glucose-6-phosphate concentrations in skeletal muscle (4); thus, vinegar may possess physiological effects similar to acarbose or metformin.”

Studies have shown that the acetic acid in ACV suppresses the accumulation of body fat and liver lipids (which is particularly great for anyone who suffers from fatty liver disease).