Of course, some of our ancestors experienced the suckiness that is acne, but nothing like the number of people that experience it today. Acne and prescriptions for acne have soared in recent years. From WebMD,

“Use of the powerful prescription acne drug Accutane has skyrocketed in recent years, despite the controversy surrounding its side effects. In fact, a new study shows the drug is increasingly being used to treat milder forms of acne — even though it has only been approved to treat severe cases. According to research conducted by the FDA, the number of prescriptions filled at pharmacies rose by 250% between 1992 and 2000, and by 275% among users of major health plans.”

Two hundred and seventy-five percent! That is a huge jump! As a previous acne sufferer as well as a user of Accutane, a dangerous drug prescribed for acne, I have to wonder why exactly acne is on the rise, and why our ancestors largely had clear unblemished skin.

While most dermatologists will tell you that diet is largely unrelated to acne, the opposite is true. Diet is the determining factor in whether or not a person will develop acne. Diet can affect acne for several reasons, inflammation, toxins, nutrient deficiencies and high blood sugar. Sugar consumption has steeply increased, just take a look at this chart from Stephan Guyenet of Whole Health Source: 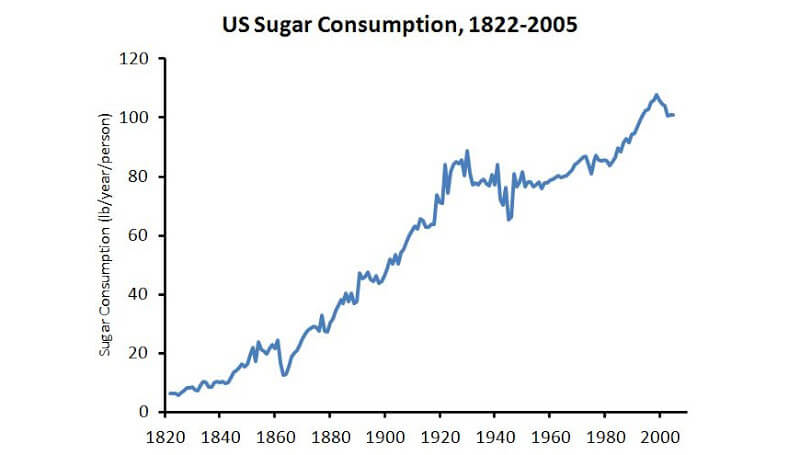 When you eat sugar or high sugar foods, blood glucose levels to rise. This leads to the production of insulin. Excess insulin not only leads to inflammation but can trigger overproduction of oil, which leads to clogged pores and bacteria.

Sugar also feeds candida or an overgrowth of yeast in the GI tract. Whatever is happening internally will reflect externally, which is why acne is an indication of a damaged GI tract. Candida and leaky gut are two causes of acne and were the reason my acne as a teen was so severe. Sugar consumption not only worsens these conditions but feeds them. Sugar encourages yeast cells to proliferate and further damages the lining of the gut, allowing toxins and undigested food particles into the bloodstream. This can lead to anxiety, depression, allergies, autoimmune disorders and you guessed it: acne.

The colon, the liver, the blood, the lymphatic system, the kidneys and the skin are all eliminatory pathways. When these pathways become overwhelmed due to poor food choices and toxin overload, then the toxins are often eliminated through the skin, resulting in acne prone, sallow, discolored skin.

We are bombarded with toxins daily, from the air we breathe to the water we drink to the food we eat. We experience a bigger toxic load than any other generation in history. When the body becomes overloaded with toxins, it will often force them out them through the skin.

The third reason: nutrient deficiencies and a damaged microbiome.

It’s no secret that the modern diet is lacking in beneficial and necessary nutrients. Vitamins A & D and E, as well as zinc and selenium, are all necessary for healthy, clear skin. Vitamins A and E help fight free radicals. Vitamin A has been shown to reduce excess sebum production. Vitamin D improves insulin response and the immune system. Zinc is often lower in people with acne and studies have shown that zinc supplementation greatly improves acne. Selenium also acts as an antioxidant and reduces inflammation.

Our ancestors ate fermented foods and bone broth, both of which are superfoods. Fermented food provides us with necessary probiotics to balance the gut and therefore the skin. Bone broth seals the lining of the stomach and is rich in vitamins, minerals, and collagen.

Ancestral diets were rich in unprocessed food, wild meat, seafood, vegetables, fruits, nuts, ferments, and broths. This is the basis of a healthy diet that will prevent acne (and serious diseases!).

The fourth and fifth reasons: stress and sleep.

It’s largely believed that our generation experience more stress and less sleep. We spend too much time working, not enough times relaxing and catching some Zs. Acne is largely dependent upon proper hormone production, and stress and lack of sleep both increase levels of inflammation as well as interfere with hormones,

“According to a study in Sleep, the risk of psychological stress increases by 14% for every hour of sleep you lose a night. So what does this have to do with acne?

“Stress increases glucocorticoid production, which can lead to abnormalities in skin structure and function, exacerbating conditions like acne,” Says Sonia Badreshia-Bansal, a dermatologist in Danville, Calif.

Dr. Weston A. Price traveled the world and studied cultures that were untouched by modern civilization and therefore lived largely as our ancestors have always lived. They worked the land, ate in season, got sleep, played, and weren’t exposed to the myriad of toxins that we are exposed to today. In his book, Nutrition and Physical Degeneration, Dr. Price found that of all the ancestral cultures he studied, none of them were plagued with the diseases we are plagued with today: heart disease, cancer, tooth decay, depression or acne.

According to Dr. Loren Cordain, acne affects 79% to 90% of the adolescent population. Cordain set out to study the Kitavan Islanders of Papua New Guinea and the Aché hunter-gatherers of Paraguay. These are two cultures, living on as their ancestors did and untouched by Western civilization. Cordain’s findings are significant because,

This is largely due to their unprocessed, local and organic diets.

“Both the Aché and Kitavan diets are composed of minimally processed plant and animal foods and are virtually devoid of typical Western carbohydrates that yield high glycemic loads that may acutely35 or chronically36,37 elevate insulin levels (Table 1). Recently acculturated hunter-gatherer populations who have adopted Western diets frequently are hyperinsulinemic and insulin resistant and have high rates of type 2 diabetes,81,82 whereas hunter-gatherer and less westernized populations living in their native environments rarely exhibit these symptoms,83– 85 including other unacculturated South American Indian tribes.”

Diet is one of the most significant factors when it comes to modern diseases. That applies whether it be heart disease, cancer, obesity or acne. The reason these diseases largely did not affect our ancestors yet plague modern day civilization is due to the fact that we have strayed so far from our ancestral roots. We don’t need to look for quick fixes, we don’t need to develop new pills or find cures, the answer is in our history. The cure is in prevention. We don’t need modern science, we need ancestral wisdom! 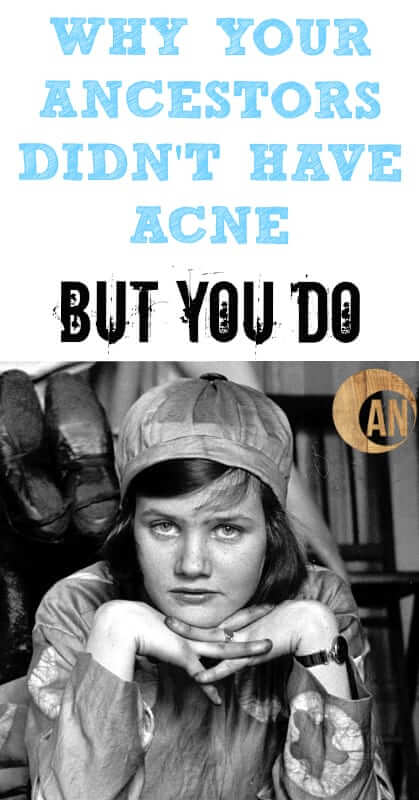