It’s actually really simple. Oil pulling is just swishing oil around your mouth for about twenty minutes. Since it has antibacterial, anti-fungal and anti-viral properties, coconut oil is my favorite to use (and tastes best). It’s actually an ancient Ayurvedic tradition that has ancestral roots. Like so many ancient traditions, it fell out of favor and people now resort to teeth cleanings, teeth bleaching, harsh mouthwashes and toxic, fluoride-filled toothpaste.

What are the benefits?

I know oil pulling may seem completely odd. How could swishing oil around your mouth for twenty minutes be so beneficial?

First, understand that the health of your mouth affects the entire body. Not only are you swallowing the bacteria (both good and bad) that is present in your mouth, but oral health can also play a role in heart and overall health. Harmful bacteria in the mouth can be transmitted to the bloodstream. Eventually, they make their way to distant parts of your body and cause chronic inflammation. From Dr. Mercola,

There is one bacterium that has been causing a great deal of trouble with people’s health: Fusobacterium nucleatum, a spindle-shaped anaerobic bacterium commonly found in dental plaque. F. nucleatum is abundant in your mouth and able to coaggregate with other species.8 Three recent studies have linked F. nucleatum with serious health problems:

The bacteria that is commonly found in gum disease has also shown to be present in blood vessels going through atherosclerosis. Thus, according to Sam Low, DDS,

Inflammation is another common denominator for both diseases. When people have moderate to severe gum disease, their levels of C-reactive protein (CRP), a protein that rises during whole-body inflammation, increase. CRP levels are also used to assess a person’s risk of a heart attack.

How does oil pulling work?

Like I mentioned earlier, I like to use coconut oil for its antibacterial, antiviral and anti-fungal properties. Coconut oil is rich in lauric acid, which is why it is so potent, making it the perfect oil to use for oil pulling. Because oil is viscous, it is able to penetrate deep into the gums and between teeth. It is able to reach places that flossing and brushing are unable to.

Bacteria and plaque are often lodged deep within the gums. As a result, mouthwash can’t reach these parts because it isn’t viscous at all. The act of swishing oil around your mouth for twenty minutes dislodges this bacteria and plaque, making your mouth (and body) a lot healthier.

My experience with oil pulling:

I love it. I recently overheard a fellow bride say that she was spending a ton of money getting teeth whitenings before her wedding. If I weren’t across the room from her and it wouldn’t have been totally obvious that I was eavesdropping, I would have told her to just oil pull!

My teeth have gotten so much whiter and continue to do so. I had really bad teeth growing up from such a poor diet, I haven’t been to the dentist in years. Just make sure to use a good brand of coconut oil, you can find one HERE. 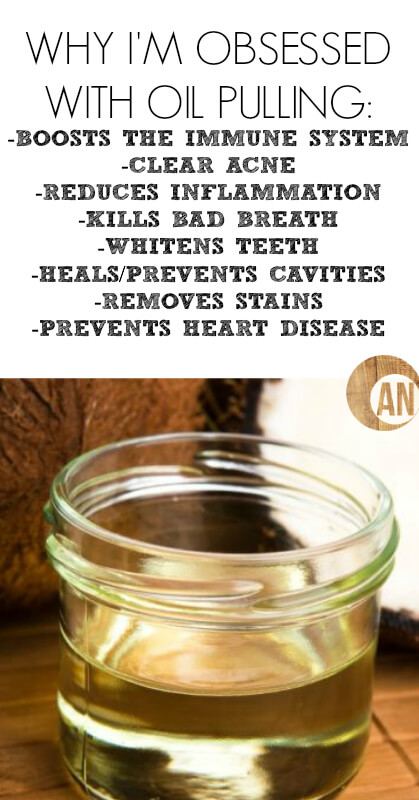