I hate sweet potatoes, not because they are bad for you. It’s because I think they are disgusting.

I always have. I am not into savory/sweet foods. Cinnamon on a potato? What the hell is that? Gross. I’ve also heard the paleo police cry, “White potatoes aren’t paleo!” Oh really? As if our ancestors came across the white variety of this starchy tuber and shouted, “Toss that shit! It ain’t sweet!” Not likely, pal.

I used the USDA’s nutrition database to compare the nutrient density of the good ol’ white potato versus the sweet potato. The values are in grams, per 100g of each.

As you can see, the sweet potato wins for calcium, vitamin C, and vitamin K; though not by much when it comes to vitamins C and K. The white potato reigns supreme for phosphorous, potassium and folate by a pretty decent margin. If you use the USDA links I provided for each potato, you will notice that the sweet potato blows the white potato out of the water in regard to its vitamin A content.

Here’s the thing: true vitamin A cannot be obtained from vegetables.

If you’re wondering about the glycemic index of each, I wondered that too.

While the results I found were varied, it appears that the GI of the white versus the sweet is not so different. According to Harvard Medical School, 150g of boiled white potato has a GI of 82, while 150g of sweet potato has a GI of 70. The School of Molecular Biosciences at The University of Sydney maintains that 150g of white potato ranks at 41, while the sweet potato is at 44. Furthermore, either potato is a great form of absorbable glucose. Though by eating potatoes with butter and/or vinegar, you can literally cut the GI in half, as fat slows the absorption of glucose.

The point is, either potato is fine to eat. In fact, they’re pretty damn good to eat from a nutritional standpoint. They are a great form of delicious carbohydrate (well, not the sweet potato, gross). There is no need to fear the potato. 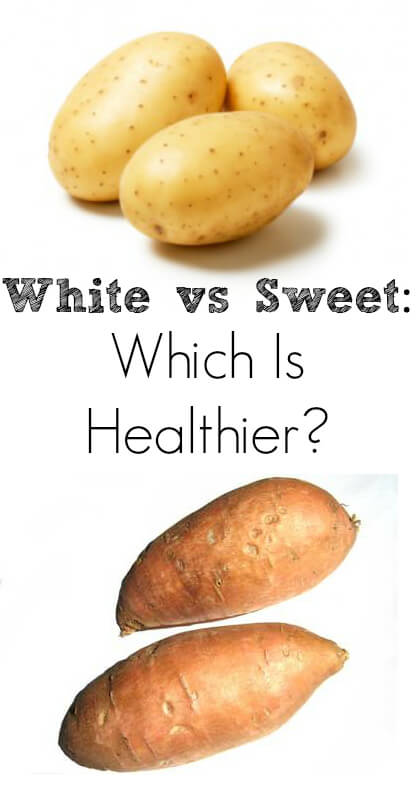