Have you ever stopped and wondered whether olive oil is healthier than butter and which fat is better for cooking? There is so much wrong information out there when it comes to good and bad fats! Let me break it down for you:

Butter vs. Olive Oil  – which fat is healthier?

Recently there was a debate on Homemade Mommy’s Facebook page over olive oil being healthier than butter. This is something I see a lot. People eschewing butter because they are still afraid of saturated fats and have been led to believe that vegetable oils are the healthier option.

Don’t get me wrong, olive oil is great.

I do not count calories, or carbs, or fats. That sounds awful to me and fosters an unhealthy relationship with food.

I simply eat whole foods, when I want and how much I want. I strive to make sure that I’m eating the most nutrient-dense foods available.

As you can see, butter is much more nutrient dense except when it comes to vitamins E and K1, otherwise known as phylloquinone.

Butter is much higher in vitamin K2 or menaquinone. Vitamin K2 is not as easily obtained from foods as vitamin K1 is. Some of the foods richest in this very important vitamin are natto (fermented soybeans that very few people can actually stand the taste of), grass-fed cheese, pastured egg yolks, liver, and butter. From Chris Kresser, L. Ac,

Vitamin K2 is also known by Activator X, as Weston A. Price called it.

It improved bone and dental health, neurological function, is anti-carcinogenic and improves the development of fetuses during pregnancy. From the Weston A. Price foundation,

Price also believed that Activator X played an important role in bone health. Butter oil concentrate cured rickets and increased serum levels of calcium and phosphorus in rats consuming a mineral-deficient diet. In a four-year-old boy who suffered from rampant tooth decay, seizures and a tendency to fracture, the combination of a large helping of this concentrate and a meal of whole wheat and whole milk rapidly resolved each of these symptoms.

Vitamin K2‘s ability to protect us from heart disease is much more clearly established. Research is in fact rapidly redefining heart disease largely as a deficiency of this vitamin. While it is most clearly established that vitamin K2 deficiency causes calcification of the cardiovascular system, vitamin K2 appears to protect against the inflammation and accumulation of lipids and white blood cells that characterize atherosclerosis as well.

Clearly, vitamin K2 is extremely healthy and we should make more of an effort to consume it. Thankfully, butter is rich in this vital nutrient. Butter is also richer in true vitamin A (retinol) as well as vitamin D.

Which Fat Is Safe To Cook With – Olive Oil or Butter?

You should eat olive oil raw.

Olive oil is not heat-stable. Butter is the much better option to cook with or ghee

as it has a higher smoke point. While butter is safe to heat, olive oil easily oxidizes at higher temperatures.

Both oils are healthy oils. One is indeed more nutrient dense, but both are safe to consume. Make sure you’re eating organic olive oil

that is free from cost-cutting cheap oils.

There is no need to give up butter because you should be eating more of it! 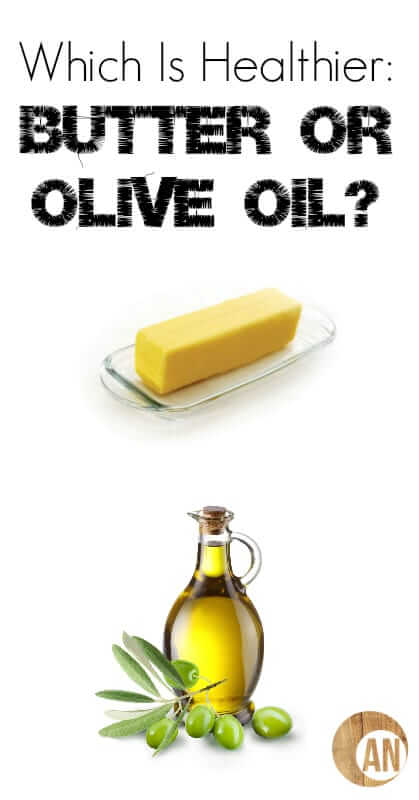