I’ve done several reviews on my website for various companies, whether they’re MLM, protein products, meal replacements, whatever. You can find those reviews here (they include Isagenix, Plexus, Herbalife, Juice Plus, Advocare, Arbonne and a few others). Here is my unbiased review of It Works.

A few days ago on my Facebook page I did a poll on which company I should review next. Lucky (actually, unlucky) for It Works, they were the overwhelming vote. I do these reviews because people deserve to know what’s in these products. Most people aren’t able to look at an ingredient label and know whether or not the massive amount of ingredients are safe, healthy or toxic. That’s where I come in.

I don’t do these reviews because I’m paid to do them (I get accused of this a lot – who would even pay me? I work for myself!). I don’t do them to bash the company. It’s not personal. It’s not my opinion. It’s a scientific review of the ingredients.

The fact is that people spend their hard earned money on these products. And then people join the company to sell these products to other people. And all the while, most people are completely in the dark on the science and nutritional information behind the ingredients used. So I chose a few products to evaluate. Enjoy!

Before it’s asked, this is the protein I use and recommend. I couldn’t find one good enough on the market, so I made my own. Grass-fed collagen with six organic superfoods: kale, spirulina, wheatgrass, broccoli, spinach and turmeric. I drink it in my daily smoothies and it gives me LIFE. Aka a healthy gut, glowing skin, strong digestion and energy for DAYS. Use code 10OFF for 10% off!

An Unbiased Review of It Works 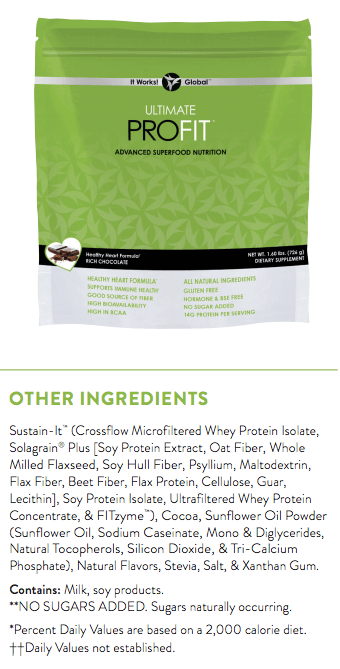 I’m a big fan of whey protein. I occasionally use it and my husband uses it regularly post-workout. But if and only if it is grass-fed. We use this one, which is undenatured, grass-fed and from small farmers in California (because I’m an American! I’m going to support our small, grass-fed farms and you should too!).

And I haven’t even mentioned the fact that if these cows are not grass-fed and organic, they’re eating genetically modified corn and soy. Cows are meant to eat grass, the bovine consumption of corn and soy – which are two of the highest genetically modified crops – causes infections in the cow and raises the omega-6 content while lowering the omega-3 content (making the whey much more inflammatory). In fact, this study demonstrated how organic dairy contains 62% more omega-3s and 25% less omega-6 fatty acids than inorganic dairy. Vitamins, particularly A, E, D and K are also higher in grass-fed dairy.

Soy protein isolate is one of the most disturbing ingredients in these products. Despite being marketed as a health food, soy is actually quite the opposite. And before anyone tries the “Asians have been eating soy for thousands of years” argument, let’s set that straight. No, they haven’t. Asian cultures have traditionally eaten fermented soy, like natto, which reduces the phytic acid, goitrogens and enzyme inhibitors that are naturally present in soy. Soy was only traditionally used as a condiment, like in soy sauce. Never, has it ever traditionally been used as an overly processed protein supplements.

First, to extract the oil from soy, it undergoes a incredibly amount of processing. It is heated to high temperatures, bleached, deodorized and treated with hexane – a neurotoxin – to extract the oil. The soy industry then had to find something to do with the leftover garbage once the oil was extracted. And what they came up with was marketing genius. They turned soy into a health food. They sold what was leftover as a healthy alternative to meat and dairy – mock meat and cheap protein. And you ate it up.

But once we delve deeper, the science is not kind to soy. This study from Harvard found that men consuming the equivalent of one cup of soy milk per day had 50% lower sperm count than men who did not consume soy (even accounting for other factors like age, caffeine and alcohol intake, etc).

This study found that soy stimulated the growth of estrogen dependent tumors found in breast cancer. And this one found the same thing.

This study found that,

“…this pilot study indicates that prolonged consumption of soy protein isolate has a stimulatory effect on the premenopausal female breast, characterized by increased secretion of breast fluid, the appearance of hyperplastic epithelial cells, and elevated levels of plasma estradiol. These findings are suggestive of an estrogenic stimulus from the isoflavones genistein and daidzein contained in soy protein isolate.“

The fact is, soy contain phytoestrogens that mimic estrogen in the body, lower testosterone and aren’t go great for cancers that develop due to estrogen dominance (like breast cancer).

While not as bad as corn, canola or soy oils, sunflower oil still isn’t my favorite. Consumed once in a while is fine, but daily in a protein shake or snack bar? That’s when this seemingly innocuous oil becomes an issue. Sunflower oil is extremely inflammatory. We know that there needs to be a proper balance of omega-3 to omega-6 fats. An abundance of omega-6 fats lead to inflammation (which has been linked to everything from cancer to heart disease).

It’s difficult to determine what kind of sunflower oil It Works is using exactly, but let’s assume it’s similar to this. The omega-3 content would be around 27mg and the omega-6 content 5374mg per tablespoon! That’s an incredibly inflammatory oil.

A processed food additive derived from corn. It can also be aggravating to the digestive tract, particularly if you’re consuming it on a regular basis. Overall, I’m most concerned with the possibility that the corn is genetically modified. Read more about the detriments of genetically modified corn here and here. 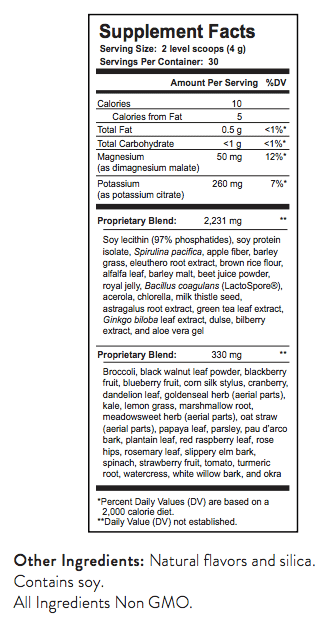 More of that pesky soy protein isolate. And GLUTEN. 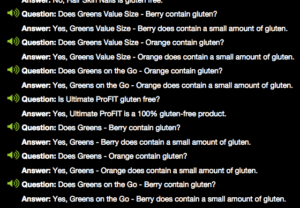 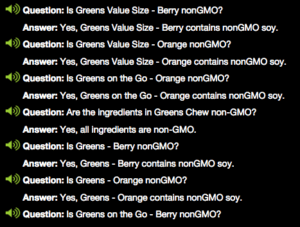 The above response when I enter “GMO” leads me to believe the only ingredient in the entire line of these products that is GMO-free is the soy found in the Greens. 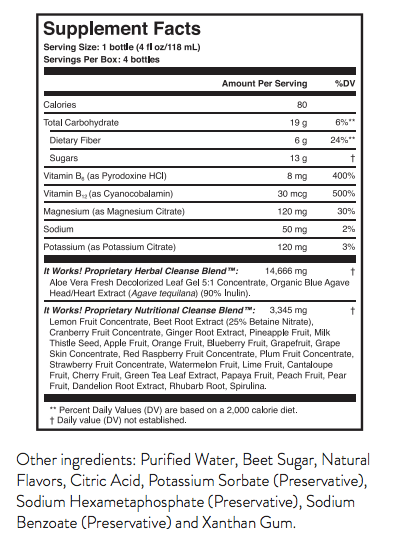 The proprietary ingredients look pretty good right? But consuming this is akin to chasing a green juice with vodka. Let’s not forget about the pesky list of “other ingredients.” The redheaded stepchild of this product that It Works is just hoping you’ll overlook.

As for “natural” vanilla flavor, it could even be secretions from a beaver’s butt. Beavers secrete castoreum, which smells and tastes remarkably similar to vanilla.

I’m not saying that It Works definitely uses beaver butts or MSG in its products, but without transparency in labeling, it’s not possible to know.

A dangerous and unhealthy food additive. One study showed it is genotoxic to white blood cells. Another study showed that when combined with vitamin C (which is definitely present in Cleanse due to the citrus) it caused mutagenicity damaged DNA.

From Be Food Smart,

This additive contains phosphorus which is an essential nutrient, but when consumed without the balance of other minerals, may affect kidneys, heart and bones. In animal studies, the following effects were reported: pale and swollen kidneys, increased kidney weights, bone decalcification, muscle fiber size changes, hyperplasia and severe skin irritations.

Sodium benzoate is a truly horrible preservative that has no business being in food. When combined with vitamin C, it can form benzene, which has been linked to cancer and DNA damage.  It can also increase hyperactivity. 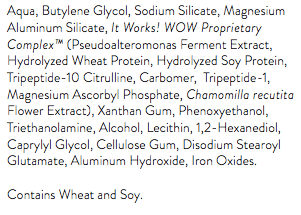 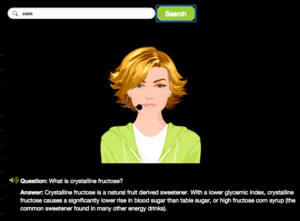 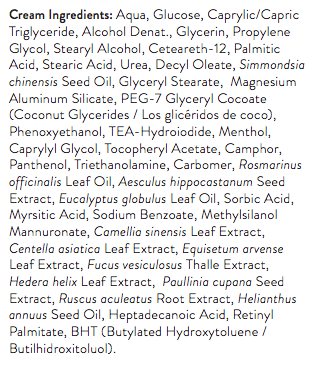 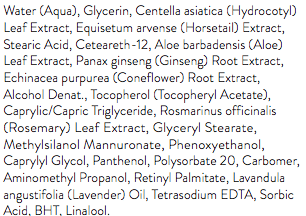 You know the adage – don’t apply anything to your skin you wouldn’t eat? Well, that’s pretty good advice. Skin is the body’s largest organ and it absorbs whatever is applied to it.

This study found that BHT promotes tumor growth. And this one found it’s completely toxic for a variety of reasons (take your pick, I’ll pass).

Has been linked to both liver issues and cancer. From National Toxicology Program at National Institutes of Health,

“Exposure to triethanolamine by dermal application resulted in increased incidences of eosinophilic focus of the liver in males and females. Dosed mice developed treatment-related nonneoplastic lesions at the site of application.”

Retinyl palmitate is rated a whopping 9 on the Environmental Working Group database rating system on skincare products, Skin Deep. That’s really high, and the higher the rating, the more toxic. From EWG,

“A study by U.S. government scientists suggests that retinyl palmitate, a form of vitamin A, may speed the development of skin tumors and lesions when applied to the skin in the presence of sunlight (NTP 2012). Officials in Germany and Norway have cautioned that retinyl palmitate and other vitamin A ingredients in cosmetics could contribute to vitamin A toxicity due to excessive exposure (German BfR 2014, Norwegian SCFS 2012a).”

“Scientists have found that vitamin A can spur excess skin growth, known as hyperplasia, and that in sunlight retinyl palmitate can form free radicals that damage DNA (NTP 2000).”

“Too much pre-formed vitamin A, including retinol, retinyl palmitate, retinyl acetate, and retinyl linoleate, can cause a variety of health problems, including liver damage, brittle nails, hair loss, osteoporosis and hip fractures in older adults. Excessive vitamin A can cause skeletal abnormalities in a developing fetus. For that reason Norwegian health authorities have cautioned women who are pregnant or breastfeeding to avoid products with vitamin A (Norwegian SCFS 2012b).”