I took my first Xanax when I was three years old.

I had the flu and my grandmother was taking care of me. My mother and her friend stopped by, saw me puking and decided it would be a good idea to give a toddler Xanax. While we no longer speak, I once asked her why she thought it was appropriate to give a toddler such a dangerous drug.

You were puking, what was I supposed to do?

Considering my mother is completely nuts, I guess I shouldn’t have expected a logical answer. I sort of assumed that anyone with half a brain and basic common sense would understand that giving an addictive benzodiazepine to a child was not just dangerous, but pretty horrible.

That’s until I came across an article on the drugging of toddlers.

I followed up on the article and found this more in-depth article. Here are the highlights:

How can any parent, how can any doctor, in good faith put an infant on anti-anxiety, ADHD, antipsychotic or antidepressant drugs? They’re babies. They’re not even old enough to exhibit signs of anxiety, depression, ADHD or psychosis. They haven’t had the social or behavioral experience to lead to such a diagnosis.

Prescriptions for anti-anxiety drugs, otherwise known as benzodiazepines has soared in recent years. Instead of addressing lifestyle factors, doctors often blindly write a prescription for Xanax or Klonopin and call it a day. From Christopher Lane, Ph. D,

Do American doctors and patients know, for example, that since 2010, there have been 6,507 U.S. drug overdose deaths involving benzodiazepines? That in 2010 alone, 124,902 Americans were rushed to the E.R. just because of Xanax? And that, one year later, addiction to the same drug resulted in 39,408 confiscations by law authorities? If they didn’t know this, they should. 49 million prescriptions for Xanax were filled in the U.S. in 2011 alone. (Source)

This doesn’t even address the fact that benzodiazepines are highly addictive. Giving them to a toddler sets them up for lifelong addiction issues.

Antidepressants can induce violent behavior, cause brain damage and suicidal thoughts. They can even cause depression.

Clinical studies of SSRIs report that agitation is a common side effect. When Yale University’s Department of Psychiatry analyzed the admissions to their hospital’s psychiatric unit, they found that 8.1% of the patients were “found to have been admitted owing to antidepressant mania or psychosis” (Preda et al. 2001). Agitation is such a common side effect with SSRIs that the drug companies have consistently sought to hide it during clinical trials by prescribing a tranquilizer or sedative along with the antidepressant. Studies by Eli Lilly employees found that between 21% and 28% of patients taking Prozac experienced insomnia, agitation, anxiety, nervousness and restlessness, with the highest rates among people taking the highest doses (Beasley et al. 2001).

After years of foot-dragging and thousands of excess suicides, the FDA finally admitted that “two to three children out of every hundred” could be expected to develop suicidal thoughts or actions as a result of antidepressant therapy (Harris 2004). The risk of suicide events for children receiving SSRIs has been three times higher than placebo. (Healy 2005).

Yet we still consider these drugs not only effective and safe, but safe for babies.

While antidepressants may have short-term benefits, those benefits are far outweighed by potentially negative side effects (like gastrointestinal bleeding).

Antipsychotics “work” by altering chemicals in the brain like dopamine, serotonin, noradrenaline, and acetylcholine. Doctors usually prescribe these for severe cases of bipolar disorder and schizophrenia. But more and more they prescribe them for anxiety, depression and eating disorders.

Some of these medications are associated with involuntary movement disorders (e.g., parkinsonism, tardive dyskinesia, and dystonias). Some can cause substantial weight gain and can negatively influence blood sugar levels and blood lipid levels. In the elderly, these medications are associated with increased chances of death and stroke. These are powerful drugs that have potentially serious risks. They should not be prescribed casually. Source

Effects of using antipsychotics may include:

There is speculation that Adam Lanza was on a dangerous antipsychotic, Fanapt (source). Dennis Bay, who murdered his wife and two children, was found to have high levels of prescription medication in his system that treat schizophrenia and bipolar disorder (source).

Let me reiterate: we are giving these drugs to children.

I am not a fan of the rising ADD/ADHD diagnosis in children. Children are naturally hyper and full of energy. They have a much more difficult time focusing. Couple that with a high sugar and refined food diet that causes overstimulation, and of course a child is going to be a bit too hyper and a bit too unable to focus.

Common side effects of ADHD medications are a loss of appetite, trouble sleeping, elevated heart rate and nervousness.

They have also literally killed people.

In 2004, Shire Pharmaceuticals, the Adderall distributor, voluntarily reported to the FDA 20 deaths by heart attack and 12 strokes: Fourteen of those deaths and two of those 12 strokes were in children. Most of those deaths occurred in individuals who were taking Adderall in a prescribed manner. Source

In addition to long-term brain damage, it appears that there is some evidence that ADHD medication can induce violence.

The Citizens Commission on Human Rights report the following violent incidents involving ADHD medications (sections may be shortened for clarity):

Tallahassee, Florida – November 20, 2014: 31-year-old Myron May, a Florida State University alum, opened fire in the school’s library, wounding three before he was shot and killed by police. ABC Action News found a half-filled prescription for the antianxiety drug Hydroxyzine in his apartment after the shooting. In addition, according to May’s friends, he had seen a psychologist and had been prescribed the antidepressant Wellbutrin and the ADHD drug Vyvanse.

Milford, Connecticut – April 25, 2014: 16-year-old Chris Plaskon stabbed Maren Sanchez, also 16, to death in a stairwell at Jonathan Law High School after she turned down his prom invitation. According to classmates and a former close friend, Chris was taking drugs for ADHD.

Myrtle Beach, South Carolina – September 21, 2011: 14-year-old Christian Helms had two pipe bombs in his backpack, when he shot and wounded Socastee High School’s “resource” (police) officer. However the officer was able to stop the student before he could do anything further.  Helms had been taking drugs for attention deficit hyperactivity disorder and depression.

Huntsville, Alabama – February 5, 2010: 15-year-old Hammad Memon shot and killed another Discover Middle School student Todd Brown. He was taking the antidepressant Zoloft and “other drugs for the conditions.” He had been seeing a psychiatrist and psychologist.

Conyers, Georgia – May 20, 1999: 15-year-old T.J. Solomon was being treated with the stimulant Ritalin when he opened fire on and wounded six of his classmates.

Of course, these incidents could be unrelated to the prescription medications, but there’s also the possibility that they could be related. I just don’t think this is something we can ignore, nor is it something we should gamble with.

There are serious risks to these drugs.

They start these kids out at a disadvantage. Prescriptions may be necessary in some cases, but not for toddlers, not for infants.

I’m not sure why this is happening, I’m not sure if it’s the fault of the parent, the doctor, or both. Surely people can’t think it’s acceptable to give a baby a drug as dangerous as Xanax. I think education is the answer.  It’s irresponsible and dangerous to put babies on them. That’s why I’ve written this. Baby’s can’t defend themselves.

Babies don’t know what’s best for them, and while I don’t either, I know that drugging a baby is not in the baby’s best interest.

Have you had experience with something like this? What do you think will help the situation? Comment below! 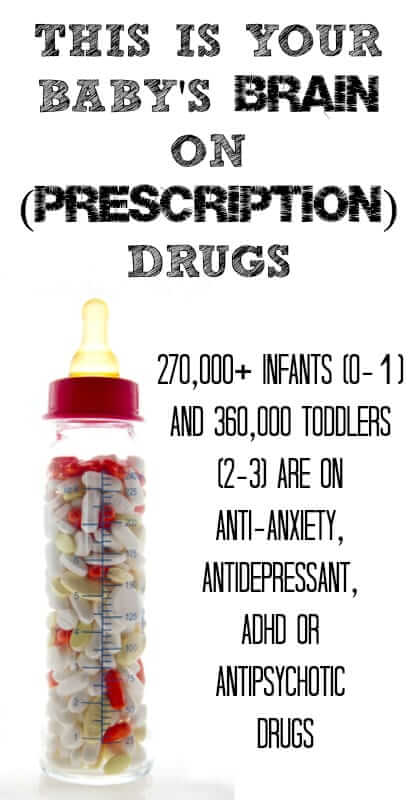