I know that people love to hate on simple solutions like this and detox in general. But there’s actually legitimate evidence backing up the benefits of lemons and lemon water. I’ve been drinking lemon water first thing in the morning for years. This is for two reasons: the first being that I don’t enjoy drinking plain water first thing in the morning; I want something refreshing! The second is that it’s incredibly good for you. There are numerous benefits to starting your day with lemon water, before eating or consuming anything else. Let’s get into ’em!

Lemon encourages the liver to produce enzymes as well as bile, which will, in turn, promote digestion and more effectively remove toxins from your system. It is a diuretic, meaning it promotes urination – which is another way the body flushes toxins.

“In conclusion, we suggest in the present study that the supplementation with lemon polyphenols suppressed body weight gain and body fat accumulation by increasing the peroxisomal ?-oxidation, which was likely mediated via up-regulation of the mRNA levels of PPAR? in the liver. In addition, the levels of serum insulin, glucose and leptin were significantly improved by lemon polyphenols, thereby improving the insulin resistance.” Source

The amount of vitamin C in half of a fresh lemon is about 22 grams. The National Institute of Health recommends men consume 90 grams of vitamin C per day while women consume 75 grams.

Upon waking, you haven’t consumed water in at least eight hours (hopefully you’re not running on less than eight hours of sleep). Dehydration inhibits digestion and can cause constipation. Therefore, drinking water upon waking improves dehydration and symptoms of it, which can also include:

Skin health is closely related to digestive health. As a former severe acne sufferer, few know this better than I do. Think of it this way – the skin is a reflection of what is happening internally. Those who suffer from acne, eczema, psoriasis, etc. often have issues with digestion.

The other issue people with skin issues often have is a sluggish or congested liver. Because lemon water both promotes digestion and detoxifies the liver, it’s great for helping clear skin.

Vitamin C, found in lemons, is also necessary for collagen formation. This is crucial for achieving smooth skin as well as wrinkle and cellulite reduction. This is also helpful for arthritis prevention and improves and well as healthy bones, 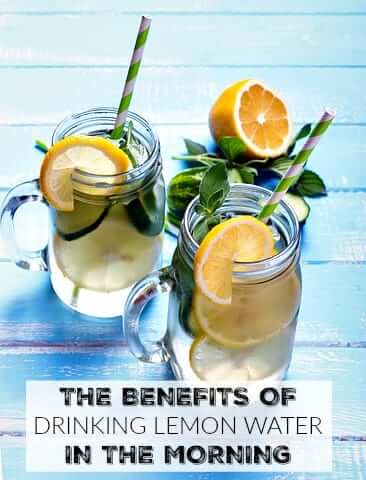 Red Bull Records sent my husband a S’well water bottle as a gift over the holidays (he works in music). I immediately stole it from him and use it every single day.  It’s seriously one of the best gifts ever. So here’s what I do: every night I fill the S’well bottle with a few cubes of ice (I can’t stand warm beverages), filtered water and the juice of half a lemon. I take it with me to bed and just store it on my nightstand.

When I wake up in the morning, I immediately drink it. It’s so refreshing and delicious, and especially first thing in the morning when the body is dehydrated after not consuming water for at least 8 hours (hopefully).

You don’t have to do it this way, you can simply pour yourself some water and add half the juice of a lemon. Warm water is usually recommended because it’s believed to be better for digestion. The temperature of the water honestly doesn’t make much of a difference so if you’re like me and love a crisp glass of cold water, go for it.