I couldn’t have been more nervous about having a c-section. I was stressed the entire pregnancy and looking back, I think a lot of it was just subconsciously being scared of having the surgery. My first birth was incredibly traumatic and even though I was cut open for a c-section 1) I wasn’t awake and 2) he came out vaginally anyway.

This time around, it would be planned. I would be conscious. And I knew I would be nervous.

In the days leading up to his birth, I did my best not to think about it. I don’t think I would’ve been able to sleep if I focused on it. I meditated. I distracted myself.

Most of all though, I prepared. I can’t recommend this enough. Go into this situation prepared. I wrote an article on how I prepared for my c-section here.

The night before, our bags were packed. I somehow managed to get some sleep, even though my stomach was churning with anticipation. I was so excited to meet our boy, but to be honest, I was just terrified.

Scott and I woke up early the morning of August 22nd. We drove down to the hospital where my first son was born, early enough that we avoided rush hour traffic (this is significant in DC and worth mentioning).

Once we got to the hospital, I thought they would put me in one of the nice rooms with big windows overlooking the city. Turns out those rooms are for moms planning on vaginal births. I was totally jipped!

They took me to an interior room with those long, wide cloth drapes for walls. Like the ones in the ER. It was freezing because we were right next to the OR. Our room, which really wasn’t even a room, was tiny. It had a bed, a computer and one small chair for Scott. Our luggage barely even fit.

The nurse started an IV while each doctor and person that would be present for the birth came by to introduce themselves. I really appreciated this! I saw my OB, chatted with the high risk OB I had seen throughout my pregnancy and got to ask the anesthesia team all of the questions I had swimming in my brain.

How bad would the spinal hurt?

How long does it take?

Will I be numb from the legs down?

I actually made it a point to maintain my sense of humor and tried to joke around despite feeling like I might have nervous diarrhea at any moment (I KNOW you know what I’m talking about).

The biggest bummer was that I had to be by myself for the spinal. Scott wasn’t allowed to come back with me.

We waited for what seemed like hours (because it was actual hours, now that I think about it) and the team came up and casually asked,

I did my best to explain to them that while for them, this was just another morning, another c-section, business as usual – that I was really scared. I was nervous and squeamish and the thought of my insides being cut open really freaked me out.

But yes, I was ready.

I kissed Scott, walked to the OR and was determined to get through the entire process with dignity (ie: no hysterical crying fits).

My two OBs held my hands and talked to me while the team worked on my spinal. I have heard so many various things about the spinal, but honestly – I barely felt it.

It was more uncomfortable than anything. It took a big longer than I expected, I guess because they have to numb the area and it’s a pretty involved process. But it honestly wasn’t bad – just weird.

They laid me down and finally let Scott come in the room. He turned on our playlist, which was a mix of rap music, Death Cab For Cutie, Bon Iver, Coconut Records, Brand New and Metric. We are a musical family so a good playlist was CRUCIAL.

Make sure to ask your OB about a playlist for your c-section. It makes a HUGE difference! And it really elevates the experience. Scott is the king of good playlists, he chose songs he knew I loved – emotional songs (Bon Iver) and songs to 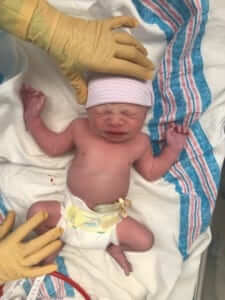 pump me up (Kendrick Lamar).

I passed the pinch test (they literally pinch you really hard to make sure you can’t feel it) and they got to work. To be honest, I didn’t even feel them performing the surgery. Sometimes I felt pressure, but at one point I thought to myself, “Have they started yet? I’m sure they have. I’m not going to ask.” And I realized that they had been working on me for a solid five minutes and I just couldn’t feel it.

When it was time to pull him out, that’s when I felt the pressure. But it was all very manageable. Just WEIRD. So many new sensations.

I had my OB tell me when he was coming out so we could play one specific song. Scott turned on Bon Iver’s Skinny Love as our son was born. (Google it now and try not to cry as your baby is born to that BEAUTIFUL SONG!)

And then I heard it – his scream. My boy’s beautiful, piercing, loud scream. Storm was living up to his name already.

“He’s huge!” My OB yelled over the drape.

Seven pounds and four ounces at 36 weeks. She said he would’ve been at least ten had I gone to 40.

His voice was loud and clear and beautiful. They immediately placed him on my chest while I cried silently. My beautiful boy. My son. My amazing little boy. I loved him immediately and just like with Everett, felt a sense of protectiveness the instant I laid eyes on him. Mine.

It’s such an interesting feeling, I feel like a lion guarding her cubs. My love for them is ancient and primal and infinite.

They took him to be warmed and weighed while they tied my insides back together. As soon as he was out, everything was 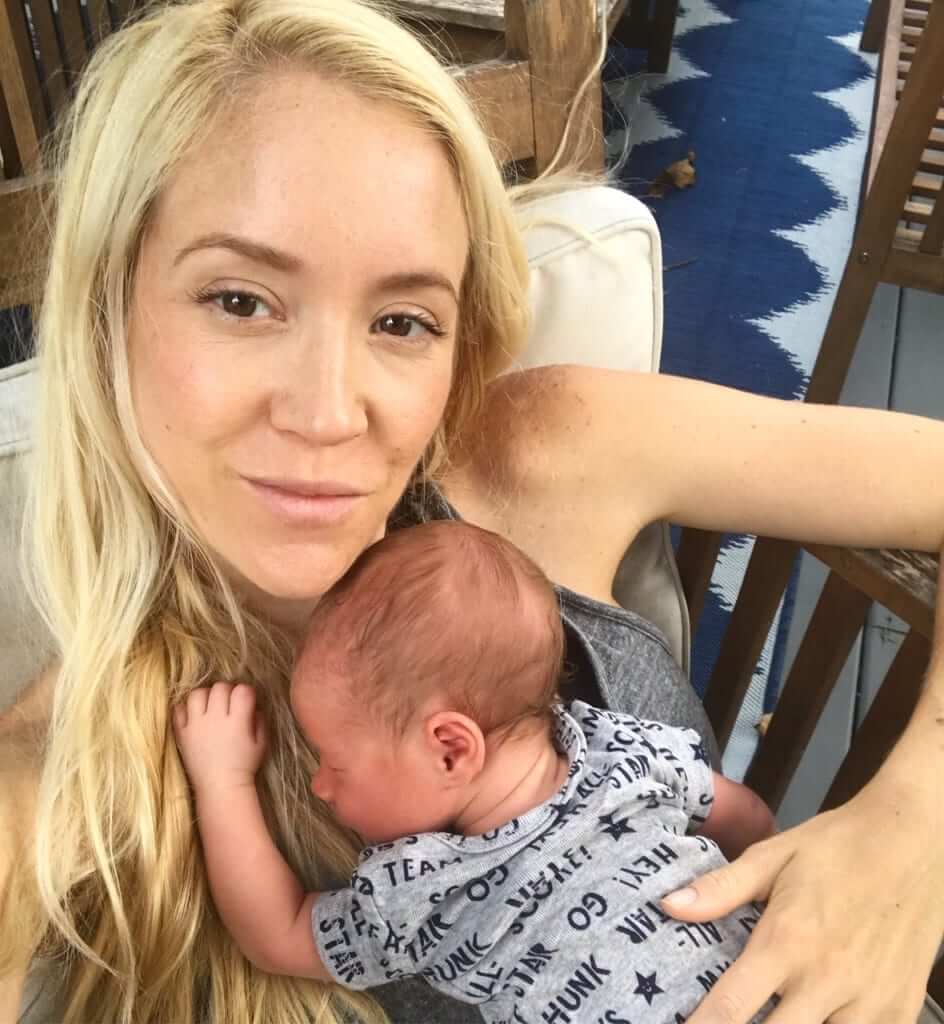 I’m almost done, I thought to myself. We did it, baby boy.

The surgery went well and they wheeled me back to my little room to recover. They monitored me for excess bleeding, which I did have. They had to give me an injection of something to stop the bleeding. It worked.

Storm and I worked on breastfeeding, which didn’t go so well (I didn’t know at the time but he had severe tongue and lip ties).

I couldn’t believe that an hour before he was inside of me, now he was in my arms. It’s just unbelievable.

Pretty soon, I itched ALL over. No one tells you that the side effect from all of that anesthesia is feeling like you rolled around naked in poison ivy. And the most intense grogginess/brain fog. I was so foggy all day.

They wheeled us into another small room with a window the size of one of my butt cheeks (to be fair, I do kind of have a big butt).

I was finally able to eat and had brought food along for the whole shabang – I wasn’t about to eat hospital food.

We settled in with Storm, who screamed his piercing scream and kept us up all night. This boy WILL be heard. He is a force to be reckoned with. He is strong and determined and knows exactly what he wants (it’s almost always more milk). He is sweet and happy, he is strong and fierce. He is kind and giggly and LOVES attention.

Storm is never happier than when someone is in his face, making eye contact and giving him their full attention. He just smiles and laughs. I love this boy so damn much. 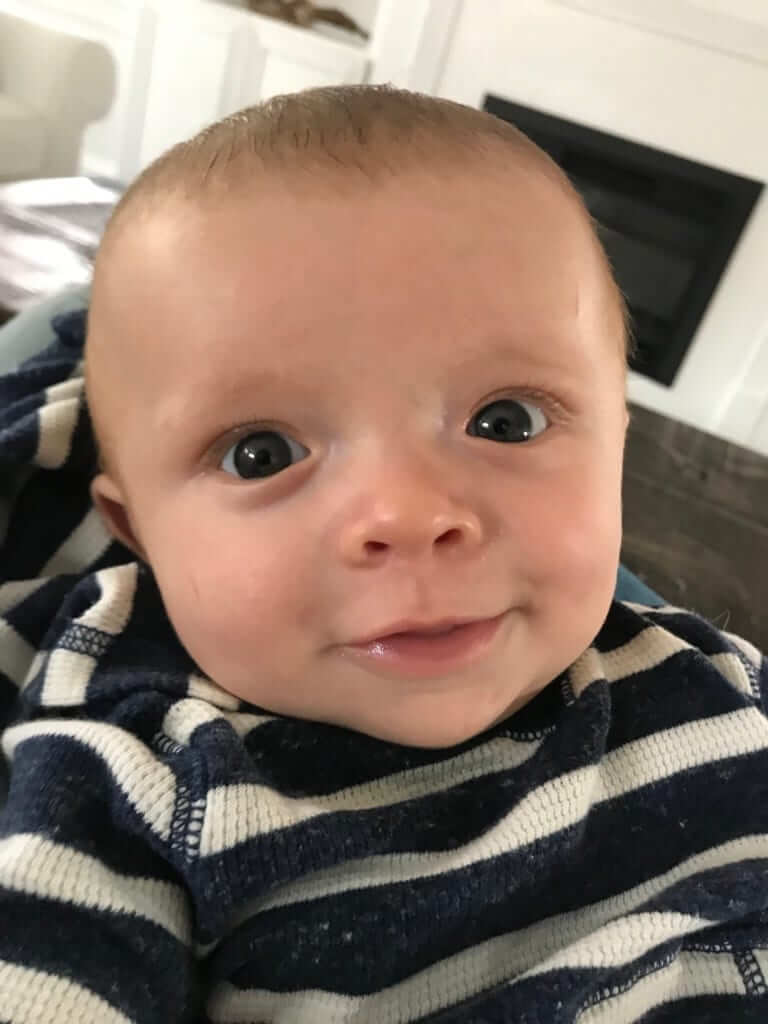