If you’ve followed me for a while, you may already know that at the beginning of this year, I was dealing with some pretty severe anxiety that seemed to come out of nowhere, for no reason. It was bad, you guys. I didn’t know what the hell was happening. Every day I literally felt either intense gurgling or nausea or a pit in my stomach. I felt deeply uncomfortable and on edge all day, then I would have full-blown panic attacks at night; particularly when I was trying to sleep.

Which led to a lot of sleepless nights. Which made the anxiety worse. It was a vicious circle.

Despite being stressed, I had no idea why this was happening to me. Up until this point, my anxiety was pretty well controlled. I’d dealt with stress before. Hell, I miscarried in September and still didn’t have anxiety anywhere near what I was dealing with in January and February.

But now that I’m improving and can make sense of the situation, here’s what happened.

We know that anxiety is exacerbated by stress. This was the first cause. I was super stressed about renovating a new house, our move kept getting pushed back, our contractor kept telling us something would cost X amount, then charging a totally exorbitant amount, he wasn’t working on our house like he should have been and it was just really wearing on me.

I got sick around Christmas and it was both a cold and some sort of gastrointestinal virus that really messed up my digestion for weeks and weeks afterward. It took me much longer than it should’ve to get over the cold, which should’ve indicated that something was seriously off with my body. My digestion has only just returned to normal (this is important to recognize because what happens in the gut affects the brain).

This is the most crucial: I had been eating gluten about once or twice a week. But let me explain…

Normally, I rarely if ever eat gluten. In October, Scott and I went to New Orleans where we thought it would be fun to throw caution to the wind and try all the different po’ boys. I brought digestive enzymes and probiotics and thought I’d be fine. And for the most part, I was. Other than irregular digestion, I didn’t have any immediate or noticeable effects.

Once we got back from NOLA, I became much more lax about my strictly no gluten rule. I thought – hey, I don’t have a specific allergy to it and I’m only eating it once in a while and eating so well the rest of the time. As it turns out, even if you don’t have an allergy to gluten, it can seriously f*ck with you; which I knew! And now I’m kicking myself because I tell my clients this all the time.

So I had been eating gluten if we went out to restaurants. For example, I’d eat sourdough with chicken liver patè. Actually, most of the time I ate gluten it was in the form of bread accompanied by patè of some sort. The last time I ate it was on my birthday, February 3rd.

And that night I woke up at 3 am with a horrible panic attack. I thought, okay – I don’t specifically know why this is happening to me, but I’m going to do everything I can to stop it. And that was the last time I had gluten.

The other night I was laying in bed with Scott when I realized just how much my anxiety has improved since I stopped eating gluten entirely.

I’d say it’s 90% better. And that’s pretty amazing because a month ago, I didn’t know how I was going to drag myself out of it.

Don’t get me wrong, there are other things I’ve done to alleviate my anxiety. It’s hard to tell which remedy worked, but I’m guessing a combination of all of them.

Here are a few other things I did:

And of course, I was using essential oils, magnesium and regularly drinking chamomile lavender tea. I know that all of this helped.

And I know that eating gluten exacerbated my anxiety. Gluten will do that and it’s well documented.

Science is just beginning to explore the gut-brain connection, or how the gut affects the brain and vice versa. From Harvard Medical School,

“The brain has a direct effect on the stomach. For example, the very thought of eating can release the stomach’s juices before the food gets there. This connection goes both ways. A troubled intestine can send signals to the brain, just as a troubled brain can send signals to the gut. Therefore, a person’s stomach or intestinal distress can be the cause or the product of anxiety, stress, or depression. That’s because the brain and the gastrointestinal (GI) system are intimately connected — so intimately that they should be viewed as one system.” (emphasis mine)

Gluten has been directly linked to anxiety. The Maryland Psychiatric Research Center at University of Maryland School of Medicine found that,

“Various types of anxiety are associated with gluten intolerance. One study found that CD patients were significantly more likely to have state anxiety when compared to controls and that after 1 year on a gluten-free diet, there was a significant improvement in state anxiety symptoms [31]. Other anxiety disorders such as social phobia and panic disorder have been linked to gluten response. Addolorato and colleagues [39] reported that a significantly higher proportion of CD patients had social phobia compared to normal controls. Additionally, a higher lifetime prevalence of panic disorder has been found in CD patients [33] and new studies have confirmed the increased association between CD and anxiety [40].” Source

Researchers have also found that children born to mothers with high levels of antibodies to gluten have almost double the risk of developing a psychiatric disorder later in life.

Research suggests that 22% of those with celiac disease will develop some form of a neurological or psychological disorder; while as many 57% of people with neurological dysfunction test positive for anti-gliadin antibodies. Fifty-seven percent! That ain’t a small percentage.

And because I know anxiety and depression often go hand in hand, it’s been linked to that as well.

“Ruuskanen et al. [42] found that an elderly population with gluten sensitivity was more than twice as likely to have depression when compared to the elderly sample without GS. Corvaglia et al. [43] have described [the] improvement in depressive symptoms following a gluten-free diet.” Source

I’m not saying eliminating gluten will 100% eliminate your anxiety. But I am saying that it greatly contributed to mine and it’s a great idea to eliminate it for 30 days and see how you feel. At the very least, you’ll be eliminating a food that offers little nutritional value, spikes your blood sugar, is difficult to digest and causes inflammation (all things that also cause anxiety in addition to weight gain, skin issues, etc). 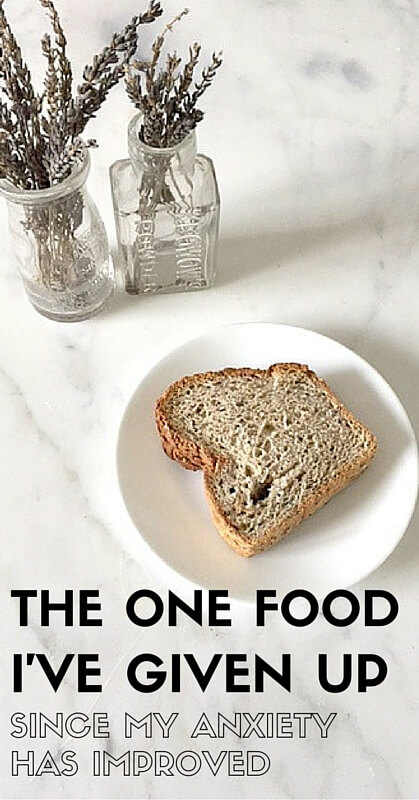