I woke up yesterday with an incredibly sore throat and feeling generally run down. I had a pretty relaxing Saturday night – my best friend Jennifer came over and we made horrible Christmas cookies that were about as hard as a collection of rocks and Scott, Jenn and I ordered sushi.

It got worse throughout the day but I was determined to meal prep! The worst days of any illness are from 3-5 (I didn’t make this up, my son’s pediatrician told me) so I didn’t want to be even more run down, snotting everywhere while trying to make my family lunch. I was going to power through this meal prep!

Here I am: living proof that if I can take an hour to meal prep while I feel like shit, you can do it too, friends! You’ve GOT this!

This is definitely one of my lazier meal preps but it’s so much better than nothing. Here’s what’s on tap: 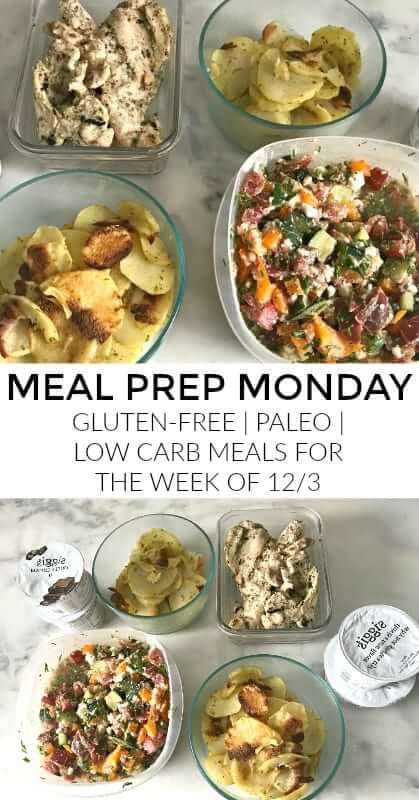 First, I turned the oven up to 400. I peeled and slices my potatoes, tossed them in Greek seasoning, salt and avocado oil. Tossed them all on some cookie sheets and let them cook for about 20-30.

I marinated the chicken in Greek seasoning and olive oil and set it aside.

I chopped up tomatoes, chives, bell pepper and cucumber for the Greek salad. I tossed it with olive oil, more Greek seasoning and organic feta cheese (omit if dairy is a problem for you).

At this point, the taters were done. I took them out, put them in a tupperware and turned the oven down to 350.

I cooked some bacon in a pan, removed it and cooked some collards in the same pan. While the collards were cooking, I whisked 8 eggs together. I added everything to a frittata pan and crumbled the bacon on top and popped it in the oven.

While that was going, I grilled the chicken.

I got everything in tupperware and was done. That’s it that’s all! It took me about an hour.

All this food in eight steps and one hour!