The very first time I met Scott and found out he was a vegan, we ended up in a pool at 3 am with me telling him how stupid his life decisions were.

“Don’t you know over 90% of soy is genetically modified?”

“Don’t you know wheat will kill you?”

“Don’t you know that grain and legume production is destroying the earth?!?!”

I like to think this is the exact moment he fell in love with me.

It was the summer of 2011 and before our first date, I emailed my best friend to say “Where could this possibly go? He’s vegan.” 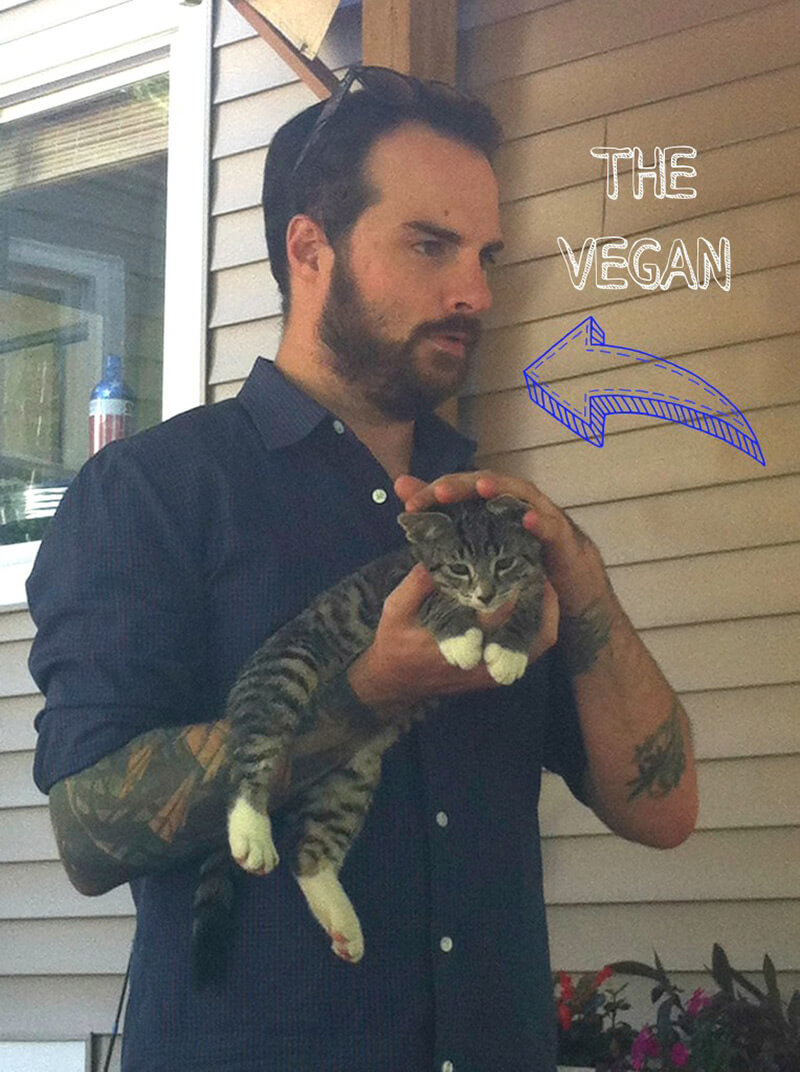 And here I am two and half years later, engaged to that vegan.

From our very first date, I really didn’t stand a chance. Even if I didn’t want to date a vegan, I was going to. And I was in love with him in about two seconds. I remember texting my friend Kait after she sent me the emergency text asking if she needed to call and fake an injury to get me out of a potentially crappy date,

“No way. He listens to rap music and dances with  me. I love him already.”

Thankfully, three weeks in, he told me he loved me. Yeah, after just three weeks he told me that he loved me and wanted to marry me. I’m glad we waited a couple of years to get engaged; dating Scott has been the most fun I’ve ever had.

But there was still that pesky vegan situation.

I’m very blunt, so I immediately told him that if we did have a future together, I couldn’t spend my life with a vegan. “It’s unhealthy, it’s not sustainable, and if we ever had kids I couldn’t have them with a vegan. They would be unhealthy.”

He told me that he’d been thinking about giving up veganism to become a vegetarian, but he wanted to wait until he hit 10 years of being vegan (it hurts my head to think that he was a soy guzzling wheat eater for TEN YEARS). So I had to wait six months.

As an aside, I gained 10 lbs in the first month of dating him. We could only go to restaurants that had vegan options, which usually meant sushi or one of the vegetarian spots in town. I was forced to eat more grains and sugar than I’m used to, so not only did I gain 10 lbs, I started to break out as well.

I love to cook, so I tried to make him healthier vegan options. I made soaked bean tacos using sprouted corn tortillas, and a ton of veggies in spaghetti sauce. He really wasn’t getting very much nutrition from his food, and looking at pictures of him from his vegan days, I can see just how that diet affected him physically. He was pale, he had bags under his eyes, his skin looked sallow.

Finally in January, his 10 year mark, he started eating cheese.

Scott loathes eggs, which made cooking for him for the last two and a half years extremely difficult. I make him protein shakes every morning with raw pastured egg yolks, but he would gag if I made him eggs for dinner. He works out about 4 times a week and needed eggs, but he still just wasn’t getting enough protein. He didn’t gain like he should, and he didn’t lose fat like he should (not that he is fat at all, but when men work out vigorously and regularly, it’s normal to lose fat).

I’m happy to report that last month, Scott finally started eating some fish. In just this month, I can see the difference in him. He’s by no means an overweight guy, but I can finally see him starting to lean out, and see his muscles become more prominent.

It definitely hasn’t been an easy eating journey over the past 2.5 years. In fact it’s been pretty effing hard, and we’ve had several fights about it. But overall, dating him has been the easiest thing I’ve ever done. Sometimes I’m still shocked that I dated a vegan turned vegetarian for so long. But there is really no better person for me.

Being with Scott makes me more of who I am, if that makes sense. I am more myself with him. He is my best friend. He embraces my quirks, like making him give up wheat and processed food for the rest of his life. He loves rap music and dancing as much as I do. He is so kind and giving. He is the funniest, most positive and care free person I know. He doesn’t sweat the small stuff. He works so hard. He does what he wants, but still has concern for others. He’s an amazing son, brother and uncle. He’s always in a good mood. He is the best person in the world.

Vegan or not, I’m incredibly lucky to be engaged to him.