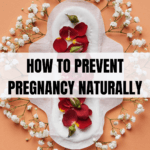 When I was 22 I had an abortion. I didn’t want to go on the pill after that because of the side effects and risks of depression, so I figured out how to prevent pregnancy naturally. Turns out it’s INCREDIBLY effective. Read on to find out how!

Why I Had An Abortion

When I was 22 I had a boyfriend I had been dating on and off for a year and a half. We didn’t regularly have sex even when we were dating but we weren’t always super careful when it did happen. At the time I just didn’t know any better. I didn’t know about my cycle, my ovulation, or that you can only get pregnant a few days out of the month. I thought that if you had sex, you always risked getting pregnant.

So when I found my period was a little late, I took a test that came back positive. My boyfriend and I immediately agreed to get an abortion. There was never a question of having it. So at 5 weeks, I terminated my pregnancy with pills I obtained from Planned Parenthood. They were supportive, professional and beyond helpful. The worst part about the whole experience was being yelled at by old white women as I walked into the clinic.

Had I ever been taught of my own body, physiology and cycle, I would never have gotten pregnant. I could have prevent it. Why aren’t we teaching young women and men about their bodies? It’s insane. We can and should teach every teenager how to prevent pregnancy naturally.

What I Did After the Abortion

After the abortion, the boyfriend and I broke up for good. He was an abusive alcoholic and started dabbling in harder drugs, eventually losing his mind. I never once regretted my decision.

I was determined to never be put in that position again. But I also never wanted to go on the pill, with its long list of side effects including depression. I found the book Taking Charge of Your Fertility and voraciously read it in under a week.

The Book That Taught Me How To Prevent Pregnancy Naturally

Taking Charge of Your Fertility immediately taught me so much and absolutely pissed me off. How was there so much information on my own body that I was never, ever taught? How could I so easily be able to know when I was ovulating and avoid pregnancy? Why wasn’t every single woman taught this in school?

It’s infuriating. And it disempowers women. We all need to know our bodies and how they function.

Here’s what some of what Taking Charge of Your Fertility taught me, summed up exponentially!

Obviously, we bleed every month on a pretty regular schedule (or should with balanced hormones). It’s okay to have a slightly shorter or longer cycle (mine is about every 31 days).

Say you bleed on the first of the month. This is day one of your cycle. Roughly 14 days after the start of your period – you ovulate. So if your period is May 1st, you’re going to ovulate around May 14th or 15th. This is when the body drops an egg that semen can fertilize.

Semen can live in the vaginal canal for up to five days. So you want to avoid having sex around ovulation. I personally avoided unprotected sex from about day 10-20. I used an app to track my cycles, thus always knowing where I was during my cycle.

An easy way to know if you’re ovulating is cervical mucus. Yet another thing women are never taught.

You know when you are producing more vaginal fluid – sometimes watery, sometimes a little thicker, sometimes the consistency of egg white? THIS means you’re ovulating!

As the body prepares for ovulation, we start to produce a thinner fluid, almost like water. This helps lubricate the canal and prepare the body to ovulate. Remember, even though ovulation hasn’t occurred at this point – you can still get pregnant because that semen can stay alive in the vaginal canal.

The cervical mucus we produce when we are ovulating is the texture and consistency of egg white. Ladies – you know what I’m talking about. When your vag is making egg whites, you are extremely fertile and get pregnant! Which is also how I easily had my two kids, but that’s another story.

So when your body is producing this egg white fluid, that’s how you know you’re ovulating!

This is not my favorite way to track ovulation as it’s more time consuming and involved, and I absolutely do not recommend using this method alone. But it can be helpful in conjunction with other methods to prevent pregnancy.

Abortions are healthcare and taking away women’s rights is extremely dangerous.

Now is the time for women to take control of their health and bodies. Our healthcare system, our politicians, our government does not care about us. America was founded on a separation of church and state and these Christian Nationalist laws that are taking over our country should concern every single one of us. The only people who should be in control of our bodies is us. The only people that should be making medical decisions for us is US. Not the increasing fascist country we are living in.

Educate yourself as best you can. Know your body and how it works. We must take control of our own bodies and our own fertility.

What else would you add to preventing pregnancy naturally? Comment below!