I had a miscarriage before I got pregnant with my son and it hit me hard. You can read about it here. I never saw it coming. I had prepared for a year and a half, ate almost 100% organic, took prenatals, exercised, detoxed regularly and I was 27. It happened almost two years ago at this point and I’m only now just getting around to writing about how to cope. This is for two reasons: the first is that I just wasn’t ready. I was too emotional about it and then I got pregnant with my son and spent four and a half months in the NICU with him. The second is that a reader asked me to write about how to cope after it happens. So I’ve decided to give you my best advice on how to cope and heal after miscarriage.

I want to write more about my miscarriage because it happens in roughly 20% of all pregnancies and yet it’s not something we openly discuss. Women are encouraged not to tell anyone about their pregnancy prior to the third month, lest they have to make people uncomfortable by telling them that pregnancy unexpectedly ended. And listen, if you’re someone who wants to wait because it would be too hard to tell everyone it happened, I understand and encourage that.

But my issue is that many women don’t even feel comfortable announcing their pregnancy prior to the third month because it’s not socially accepted. If you want to tell the world – tell ’em! It’s your pregnancy and you don’t have to play by anyone else’s rules. For this reason, I plan on letting people know almost immediately the next time I get pregnant.

I have a big mouth and I hate keeping secrets.

To make matters worse, it happened the night before one of my friend’s weddings. I was so excited about her wedding and my entire group of friends was going. This led to,

Getting those texts while I was emotionally destroyed and laying in the bathtub because I was in so much pain just made it all worse. I wanted to be there. I wanted to tell everyone what happened. But because I never told most people I was pregnant in the first place, it just didn’t feel right.

Heating pads. Two of them. Unless I was in the shower or tub, I had a heating pad on my lower back and one on my lower abdomen. The cramps were like the worst period cramps you can imagine that radiated into my back. I was either on the couch or in bed with both of the heating pads.

I applied lavender on my feet and head to relax me. I applied peppermint to my lower back to help with the pain.

When it got to be too much, I took seriously hot showers. This actually helped the most. I couldn’t feel the pain nearly as much with the hot water running over my stomach. I laid down in the tub and let it cascade over me. The second I got out, it was back. Searing pain.

This went on for two straight days. I somehow got through it without any Advil or Tylenol. By Sunday afternoon, the pain was mostly gone and I had passed two golfball sized masses, which I still actually have in my freezer. I know that sounds nuts but I’ve talked to other women who have had miscarriages who felt the same way. I couldn’t get rid of them. My plan was to bury them in my backyard under a tree, but when I bought two trees I forgot about it when we finally moved to our new house and have not yet bought any trees.

Say NO. Seriously, give yourself permission to say no. As women especially, we often feel obligated to say yes, to people please, to be agreeable. Fuck that. You’ve just been through something emotionally, physically, mentally and spiritually debilitating. Brutal. Devastating. Say no and don’t feel bad about it!

I found it helpful to surround myself with friends afterward. Scott and I went out with friends for dinner a lot. We went to their parties. We took lots of walks.

I found that it was so important not to isolate yourself, even though that may be all you feel like doing. I did that for about a week before I kind of forced myself to start being social again. It helped to feel normal. It helped to be around my friends, who are all very positive, optimistic and hilarious people. I have some friends that aren’t like this and I avoided them during my healing process.

And that’s okay. If you have a friend or family member who stresses you out, you are not obligated to spend time with them or talk to them. You’ve just been through something terrible and your priority needs to be yourself.

Looking back, I think it also would have been helpful to maybe go on a weekend away at the beach. I find that beach so relaxing and healing. I’m just in a different state of mind at the beach. I also wish I would’ve gotten massages afterward. My back really hurt for a while because I was so hunched the entire weekend. I basically laid in the fetal position for 48 hours straight.

Not to mention that massage is just relaxing and healing in general. Positive touch is so important, especially after your body goes through something as arduous as miscarriage.

And I know it’s clichè, but it’s clichè because it’s true: time heals all wounds. I’ll never forget what happened, but I did heal. I had a miscarriage in September and found out I was pregnant with my son in March. I was still upset about it in March, but I fully healed after I had my son (albeit very early, in August). Everyone is different. Be patient with yourself. There’s no right or wrong way. It’s going to take time.

My main message: take care of yourself. Indulge in things you normally wouldn’t indulge in, like a day in bed watching funny movies and ordering takeout (try to keep it healthy though because your body needs those nutrients to heal physically). Get a massage, get your nails done, get a facial, get your hair done. Maybe take up lifting weights, swimming, hiking or running. I find that being in nature always helps. Do whatever makes you happy and will give you some relief as long as you’re not hurting yourself or anyone else.

I’ll also add that I think miscarriage is much more upsetting and stressful if you have no other children. As awful as it would be to have a miscarriage again, I at least would be comforted by the fact that my body can physically bear children. That is one thing that made my miscarriage so much worse, I was so worried that it would happen again, that I wouldn’t be able to have children.

If you already have a child, that fear is eliminated. And you can hug that child for comfort. When it’s your first pregnancy, you don’t have that option. That fear is very real. And some women go on to have another miscarriage before successfully conceiving – and my heart goes out to those women. Because it’s just devastating.

If you had a miscarriage, my heart goes out to you. You are my sister and it’s fucking brutal and I’m sorry it happened to you. We are in this together and I’m here if you ever need to talk. Comment, email me. I know what it’s like and how isolating it can be. 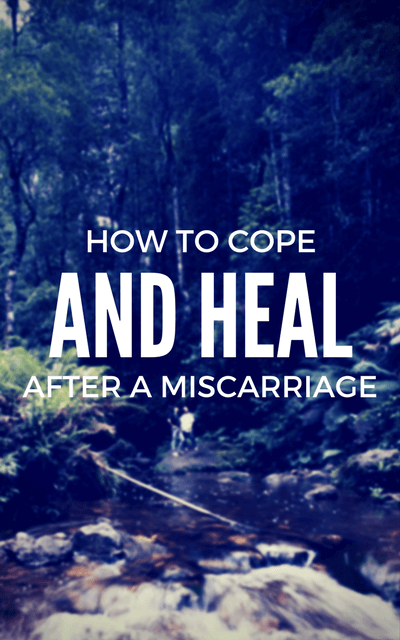