Benzodiazepines are a class of physchoactive drugs that depress the central nervous system. They are often prescribed for anxiety, as they enhance relaxation. You may have heard of Valium, Xanax or Klonopin. These are all benzodiazepines.

My Experience With Benzodiazepines

My experience with benzodiazepines begins with my mom. She has been taking them in the form of Xanax and Klonopin since before I was born, during pregnancy and to this day she takes them. She is addicted. Joanna gave me my first Xanan when I was three years-old. I was sick and vomiting. My grandmother was taking care of me. She stopped by and decided it was a good idea to give a 3 year-old a dangerous prescription drug as a cure to the flu.

Growing up, when I was upset, when I was stressed out, when I would stay up too late because I wasn’t tired, she would give me Xanax. I didn’t know any better, or that they were extremely dangerous. By the time I was sixteen, I had accidentally overdosed twice. The second time I was put in the psychiatric ward at Children’s Hospital…where they forced even more drugs on me. They told me I was depressed and that I needed to be on Prozac. I told them I was not depressed and that I had anxiety issues. This was true.

My anxiety issues stemmed from being given a Xanax anytime something negative would happen to me from such a young age. I refused the Prozac. What struck me as odd in the psychiatric ward was that instead of talking about and getting to the root of our problems, they just tried to shove drugs down our throats. One girl, who was 14, was so drugged up that she accidentally walked around the ward naked, unable to speak, until the nurses grabbed her and took her back to her room. It was awful.

That was the last time I have ever taken any form of benzodiazepine. Unfortunately, like so many people prescribed benzos, my mother became fully addicted. Then became addicted to prescription pain killers and Adderall. The last I heard, she had moved on to heroin. This is the unfortunate reality for many who are prescribed these dangerous drugs.

Why Are Benzodiazepines So Dangerous?

Benzodiazepines are highly addictive. Once a person develops a reliance on them, which happens fairly quickly, it’s extremely hard to get off of them. People even go through withdrawal when giving them up. Long term effects include depression, aggression, sleep impairment, irritability, hallucinations, personality changes, impaired gut function and irritable bowel syndrome. In Anatomy of an Epidemic: Magic Bullets, Psychiatric Drugs, and the Astonishing Rise of Mental Illness in America,

Long term effects of benzodiazepines include severe cognitive impairment including confusion, disorientation and memory. Long term use can also cause anxiety, which is what these drugs are prescribed for in the first place.

Benzodiazepines often cause social deterioration and can even lead to agoraphobia. When people develop a dependence on benzos, they feel that they can no longer function socially without them. Going to a party becomes a terrifying outing, going to a social function seems impossible.

I know how easy it is to get benzodiazepines. It’s as easy as walking into a doctor’s office and complaining of general anxiety symptoms. My mother did what she called “doctor shopping.” She would schedule several appointments at doctors offices and just complain about stress and anxiety. Each time she walked out with a prescription. Since I was a kid, she called doctors “glorified drug dealers.”

Those of us who have suffered from anxiety often think ours is worse than anyone’s, that no one could feel what we have or are feeling during a panic attack. I have done this too. The truth is, and it’s essential to recognize it, is that anxiety is just a feeling. Nothing is truly wrong, we just feel absolutely terrified, hopeless and scared. If there were anything actually wrong with us, it wouldn’t be anxiety.

First and foremost to dealing with anxiety is diet. What we eat literally has a direct affect on the brain. Toxins, sugars, improper fats and too many carbohydrates can aggravate anxiety, depression, and even lead to more serious mental disorders. Food is meant to fuel the brain, if you aren’t eating well; it is nearly impossible to recover from anxiety. To learn about proper diet and how to eat well, check out my 21 Day Lifestyle Transformation.

1. The 5-5-5 method. Breathe in counting to 5, hold it for 5, exhale for 5. Do this 5 times at least, or until you have calmed down. Just focus on your breathing. When people experience anxiety, they hold their breath, making the feelings of anxiety worse. Do not hold your breath. Breathe.

2. Get your diet in check. Vegetable oils, sugar, processed foods and an overall inflammatory diet are one of the causes of anxiety. If you’re not eating well, you will experience anxiety. Healthy fats, amino acids and vitamin D are all necessary for a leveled mood.

3. Check out The Mood Cure

. The Anxiety and Phobia Workbook

4. Exercise. Workout, do some yoga, get moving. When you exercise, your body releases endorphins which naturally boost mood.

5. Magnesium. Many anxiety sufferers are deficient in magnesium. It is extremely relaxing. I use magnesium lotion before bed. Magnesium has a calming effect.

To those who are considering benzodiazepines, I assure you it is much more dangerous to take them than to not. You can overcome anxiety naturally. Anxiety cannot kill you or make you go crazy. It sucks and it’s horrible and terrifying. I know, I’ve been there. But you can get over it.

Think this article is helpful? Please share with your friends or anyone dealing with anxiety. 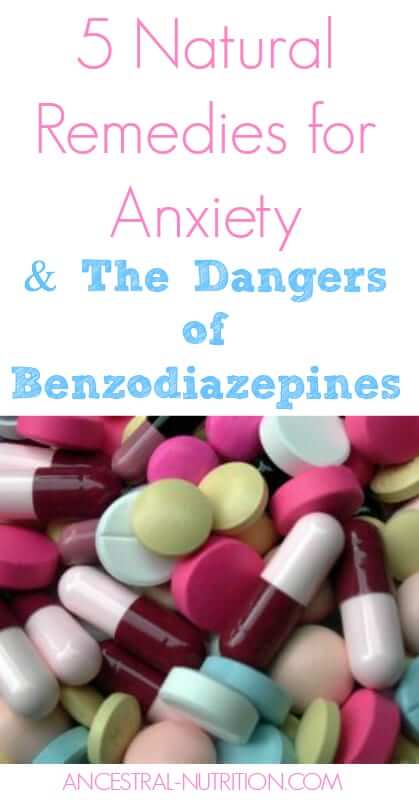