By acknowledging that fit shaming exists, I’m not denying that fat shaming doesn’t.

It does. Especially on the internet. People can really be assholes when they’re protected behind a computer screen. It’s mean, it’s cowardly, it’s disgusting. I do not condone shaming someone or something. Hell, I don’t even use the word slut. But there is no denying that fit shaming exists as well. Especially when people of average weight are now the minority.  69% of Americans over the age of 20 are overweight.

The biggest place I have personally seen fit shaming (in my own experience and among my friends) is in the workplace; whereas the most common place I have seen fat shaming is on the internet. This will likely differ for everyone.

I entered the grown-up workforce when I was 20 years-old (i.e.: an office job with the government).

In that office, was working with a pretty progressive bunch of people and for the most part, I really liked them. I liked my steady paycheck and schedule. There was a heater below my desk that I turned on full-blast in the middle of DC winters. I liked that we seemed to celebrate every birthday, baby, retirement and holiday. Any day was a good day for cake. Is it Tuesday yet? Whip out the chocolate cherry cake in the back!

While I wasn’t certified in holistic nutrition yet, I still didn’t want to eat poorly at my job.

I mostly used these parties as a good way to avoid doing work. This worked for a while until people began noticing that I didn’t share their affinity for cake.

“Don’t offer Dani any cake, she’s afraid of getting fat.”

“Why won’t you eat this? It’s just one piece of cake!”

“We would’ve invited you to the baby shower but you wouldn’t have eaten anything anyway.”

(In regard to that last one – joke’s on you suckers, I would’ve brought a gift).

After over two years at that job, I moved on to a very well respected law firm downtown (also known as the worst job I’ve ever had – and I’ve had a shit ton of jobs). By then I’d learned my lesson surrounding the cake issue: lie about having a gluten allergy. What can I say? I’m wise beyond my years.

I was pretty impressed with myself for lying about having a gluten allergy. I don’t eat gluten in general, but I also do not have an allergy to it. For a while, this seemed to work. I wasn’t pissing anyone off by declining their treats, and everyone felt sorry for me because I couldn’t eat cake. Win-win.

Until the comments started creeping in. Again.

“I never see you eat lunch.”

I never see you eat lunch either but I assume that you do. Also, why are you keeping tabs on my lunch habits?

“You’re just obsessed with what you eat.”

I think you’re obsessed with what I eat.

And then, the kicker. The most inappropriate, rude and offensive comment of them all.

Are you fucking kidding me?

Someone actually asked me if I was anorexic. ME. The lady who loves to eat.

I’m not even overly thin, I’m just a normal person. One of the most upsetting aspects of this question is that it implies I’m too thin, and I’ve always been pretty proud of my big ass.

So I decided to ask some girlfriends if they had been fit shamed. All women are of normal size, not too thin, not on crazy diets. Just normal women.

“People tell me I need to eat something. People have playfully said, ‘You’re so thin, I hate you.’ But there was always a tinge of truthfulness to it.”

Can you imagine for a second, someone saying to a bigger woman, “You need to stop eating so much?”

“I get criticized most for not eating gluten, people tell me it’s in my head and that 90% of people fake gluten allergies. I also get the ‘Tamara won’t eat bad, she’s always eating salads.’ kind of thing.”

Don’t you just love fake statistics? And why is it anyone else’s business what Tamara chooses to eat?

One time a very thin runner I know ran into me at Ulta. She came up to me and said, ‘I should have knows it was you by your legs. Nobody has thighs like you.’

My boss was always trying to derail my eating habits. He and everyone in the company knows I don’t eat bread, pizza, those kind of carbs. At a marketing meeting, the only food he ordered for us included bagels, pizza and junk food. It was so off from what an organic company would eat, but it was clear he did it to force me to eat those kind of carbs.

Then when out to eat with coworkers I used to get sarcastically made fun of. Another guy in particular would sarcastically ask the waiter if there was anything gluten-free, then look at me and laugh.

And who could forget the hate-storm that ensued after fitness blogger Caroline Berg Eriksen posted this picture just four days after giving birth: 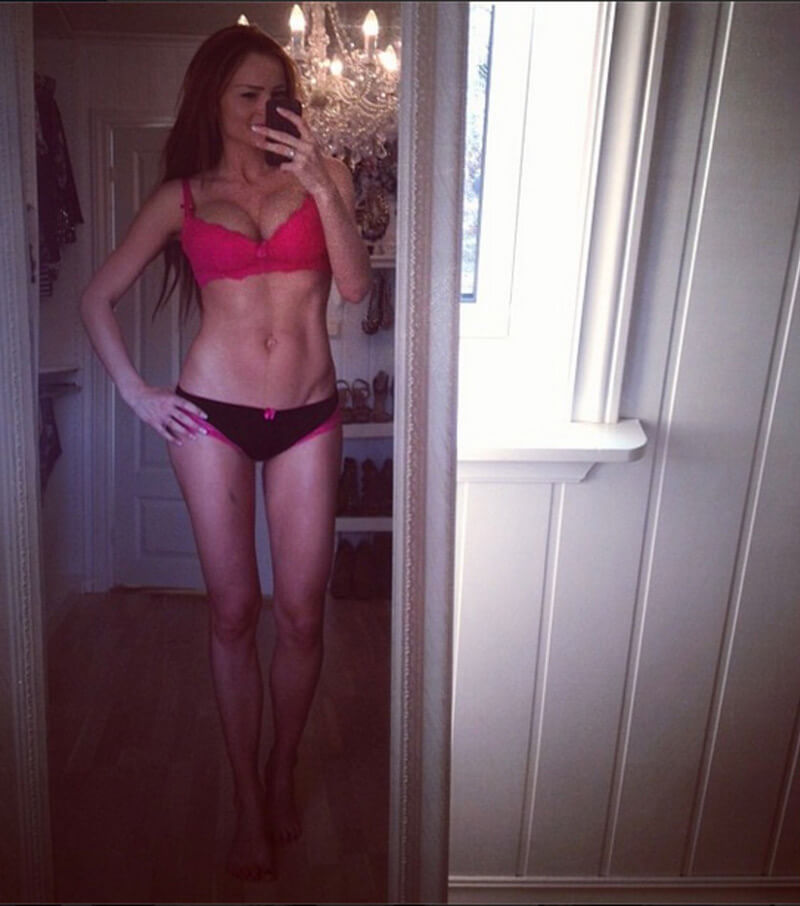 When I saw the photo, I thought, ‘Wow. That’s amazing. Homegirl really took great care of herself throughout pregnancy.’ I found it inspiring.

Others, not so much. She was accused of neglecting her child to snap a selfie (which takes all of a few seconds). She was accused of starving herself.  Others commented saying the picture made them feel bad about themselves. Others said this will pressure young girls to live up to her image.

This woman wasn’t just shamed for her healthy body. She was harassed.

I follow her website. She eats well, she exercises, she lives a healthy lifestyle. And she was harassed over it. What if this pressures young girls to live up to her image? Will it encourage them to follow her healthy recipes and lifestyle? I hope so.

What if someone feels bad looking at this image? Then that person should take steps to live a healthier lifestyle, which will, in turn, boost their self-esteem. Someone’s self-confidence should not be wrapped up in what other people look like. And it shouldn’t prompt someone to shame someone else for being thin.

Here’s the thing: fit or fat shaming is not okay for anyone.

I am not saying overweight women and men are not shamed. What I am saying is that it’s not exclusive to those who are overweight. There is no way of gauging who experiences more shame, but it is more socially acceptable to shame a fit person, and it’s easier to disguise it with playfulness or sarcasm.

I want to be healthy. This means I want to eat well as much as possible to preserve that health, and I don’t want to get shit for doing so.

I don’t think anyone should be given a hard time for maintaining a healthy lifestyle. If that’s not your lifestyle, that’s fine. But it’s not your place to comment on someone else’s, whether that person is fit or fat.

*names changed to preserve the identity.