Before you decide that this article has some sort of agenda or that I’m bankrolled by the dairy industry (yes, I’ve actually beed accused of that) let me just clarify that I’m sharing this information for a few reasons, one being that veganism is a hugely popular diet and people should really be aware of the pitfalls of it. The other being that I was a vegan and it basically wrecked my health (you can read more about that here). My intention is not to bash veganism, but to be honest with you – because so many others are not (or, they’re just unaware of the facts below).

I share this information with you not because this is my opinion, but because this is the reality of a plant based diet. So before you decide to leave a hateful comment, know that I’m coming from a good place. People deserve to know the truth about this way of eating, not the dogma that surrounds it.

Fat has been vilified over the years, but I’m happy to say that it’s making a well deserved comeback. People are starting to realize that banishing all fats makes no sense and holds no scientific accuracy. And while there are healthy vegan fats, like olive, coconut and avocado, the main isssue I have is the lack of EPA and DHA. Plant based fats contain alpha-linolenic acid (ALA), not docosahexaenoic acid (DHA) or eicosapentaenoic acid (EPA).

EPA and DHA are the fats that are beneficial to brain health, heart health and inflammation and these fats are severely lacking in a vegan diet. Vegan foods like chia seeds, walnuts and pumpkin seeds do contain ALA. Unfortunately there’s a false belief that ALA is converted to DHA and EPA in the body, but the reality is that this conversion is very, very weak with about a 5% conversion at best. You can read more about this via published studies here and here. The bottomline is that that a vegan diet is severely lacking in EPA and DHA, omega-3s that are critical to heart and brain health and well as a healthy inflammatory response.

Again, contrary to popular belief, it’s not possible to obtain vitamin A from orange veggies (although I’m still totally down with carrots and sweet potatoes). Plant foods actually contain beta carotene, the precursor to vitamin A (retinol). Retinol is the active, usable form of vitamin A. And it’s badly lacking in plant food.

The ability to convert and beta carotene to retinol will vary between individuals and can be effected by gut, hormone and thyroid health (all issues I’ve personally seen predominantly in vegan populations). Another issue with the conversion is the fat present, as vitamin A is a fat soluble vitamin. This further lowers the availability of vitamin A as majority of vegan diets are extremely low in fat. Not to mention that 45% of adults can’t make this conversion at all (nor can babies or the elderly).

Foods high in vitamin A include wild meat and seafood, egg yolks and liver.

Contrary to popular belief, there are no plant based forms of B12. No, not even nutritional yeast. This myth is especially pervasive because plant foods and supplements that are said to contain B12 actually contain B12 analogs called cobamides. These cobamides block the absorption of true B12 and increase the necessary intake of true B12 (source).

K2 – the oft overlooked vitamin. While not as popular as some of the other nutrients on this list, it’s not any less important. Vitamin K2 is necessary for bone, cardiovascular, prostate and skin health, among others. I think a lot of the confusion that surrounds K2 is that there is actually K1 (in plant foods) and K2 (in animal foods). So similar to vitamin A with the beta carotene and retinol.

While animals are able to effectively convert K1 to K2, this ability is lost in humans. K2 is largely found in egg yolks, liver, beef, chicken and grass-fed dairy products (particularly gouda). There is one plant food that contains K2 – natto. Natto is a fermented soy. It tastes terrible and is pretty hard to come by. 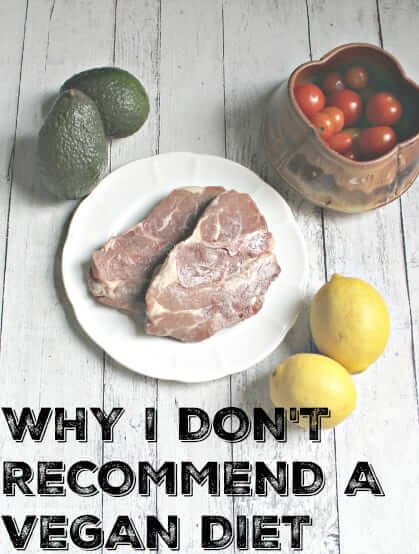 Vitamin D is a vitamin that is largely lacking in a plant based diet. Yes, there’s the sun, but the body needs adequate
amounts of cholesterol to properly convert sunlight into vitamin D, and healthy cholesterol levels are much easier to obtain on a diet that consists of a variety of plant and animal foods. There are vegan supplements that contain D2, but D3 is the active and useable form of vitamin D.

Studies have shown that 58% of vegetarians and 74% of vegans are deficient in vitamin D when compares to omnivores.

There are two types of iron, heme and non-heme. Heme iron is found in animal products while non-heme is found in plants. I’ll let you guess which one is better utilized and absorbed.

One study of vegan females found that even though they were eating plant based forms of iron and even foods with added iron, they were still deficient.

While not impossible to obtain zinc from plant foods, it is difficult. Zinc in concentrated in animal foods like beef and oysters. The other issue with plant based forms of zinc is that they also contain phytic acid, which binds to minerals like iron, magnesium andyou guessed it – zinc, and prevents them from being absorbed. From one study,

Also from that study,

SUSTAINABILITY, NATURE AND OUR ANCESTORS

Animals feed the land. This is one huge aspect of the environment that vegans seem to be entirely oblivious of. There is a symbiotic relationship between the plants and animals we eat. With this article, do not misunderstand that I think the industrialization of meat and CAFOs are deplorable. I am not in any way advocating these systems; in fact I encourage you to opt out of this meat entirely and source local, grass-fed and pastured options.

Pasture raised animals actually feed and build topsoil. Without topsoil, humans will die off. We would not be able to grow food. So removing animals from the equation removes the proper food source for the land. Like any living being, the land needs to be fed. And yes, dirt is living. There are millions upon millions of microorganisms in the soil.

In Lierre Keith’s brilliant book, The Vegetarian Myth, she discusses these issues.

All right. Well, what does the soil want to eat? Well, it wants manure, and it wants urine, and it wants blood meal and bone meal. And I…could not face that. I wanted my garden to be pure and death-free. It didn’t matter what I wanted: plants wanted those things; they needed those things to grow.”

If we remove animals from the equation, we’re left with fossil fuels. How exactly is this a sustainable way of eating? Instead, we should eliminate CAFOs and return animals to pasture. Animals feed the land via their urine, manure and eventually, their bones.

“If we took 75% of the world’s trashed rangeland, we could restore it from agriculture back to functioning prairies — with their animal cohorts — in under fifteen years. We could further sequester all of the carbon that has been released since the beginning of the industrial age. So I find that a hopeful thing because, frankly, we just have to get out of the way. Nature will do the work for us. This planet wants to be grassland and forest. It does not want to be an agricultural mono-crop.”

I’d also like you to consider where your food comes from. Do you know? Do you know where that mock meat was shipped from? Probably thousands of miles away, from a GMO field destroying the land with glyphosate. What about all those grains and legumes? I don’t know about you, but I’ve never seen a locally grown grain or legume at a farmers market. Bread, yes. But who knows where they source their grain from? Consider the thousands of miles vegan staples have to travel to reach your plate. Consider the amount of small animals killed each year when plowing those millions and millions of acres.

We need to end the myth that cattle is bad. Beef is not bad. What we do to cattle is bad. Alan Savory has successfully demonstrated that properly pastured cattle, aka Holistic Management, can actually reverse desertification and heal the land, while sequestering harmful emissions.

Now consider supporting your local, grass-fed farmer. A family of six (that’s four kids!) could live off of one cow a year. A cow that helped build topsoil, a cow that lived a happy life on pasture. A cow that wasn’t shipped from God knows where, and your money would go to a local farmer.

There has never been a culture that relied solely on plant foods. It does not exist. This is of course excluding groups of people who choose to not eat meat for religious purposes, which is not the same as ancestral and traditional cultures. Our ancestors ate meat, it is a fact. They ate a variety of both plant and animal foods. They respected the land and understood nature. And this is exactly what I think people should strive to do.

SOURCES OTHER THAN THE ONES LINKED TO ABOVE:

Why An Abortion Was the Best Healthcare Decision Of My Life

How I Prepared For The COVID-19 Vaccine