So, you think by buying a Beyond Meat Burger, you’re doing yourself and the environment a favor? Think twice. I took a look at the ingredients and here’s my honest review!

You may have heard about that new Beyond Meat Burger.

This new plant-based burger that tastes and even bleeds like a real burger. If that isn’t enough to weird you out, I don’t know what is.

Weird as it seems to me, I’m much more concerned with the actual ingredients of this beyond meat burger. Especially when the product touts itself as not just healthy, but sustainable.

Is Beyond Meat actually healthy? Is it actually sustainable?

After taking a look at the ingredients, the answer is hell no. Not even close.

The original Beyond Meat burger: 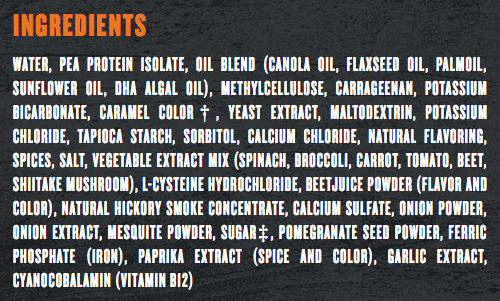 There are many ingredients in these products that are both unhealthy and unsustainable.

Processed soy is particularly bad. Whereas fermented, organic soy in small amounts (like natto) does not pose serious health risks, eating soy protein isolate will definitely take its toll on the body.

Some effects of soy include decreased libido, mood swings, depression, and several others.

This study from Harvard found that men consuming the equivalent of one cup of soy milk per day had 50% lower sperm count than men who did not consume soy. That includes even counting other factors like age, caffeine and alcohol intake, etc.

This study found that soy stimulated the growth of estrogen-dependent tumors found in breast cancer. And this one found the same thing.

This study found that,

“…this pilot study indicates that prolonged consumption of soy protein isolate has a stimulatory effect on the premenopausal female breast, characterized by increased secretion of breast fluid, the appearance of hyperplastic epithelial cells, and elevated levels of plasma estradiol. These findings are suggestive of an estrogenic stimulus from the isoflavones genistein and daidzein contained in soy protein isolate.“

Soy is high in phytic acid, also known as phytates. These phytates prevent the absorption of minerals like iron and calcium (among others). This can be particularly harmful, especially for children.

Additionally, soy is high in phytoestrogen (source). This can block normal estrogen, wich leads not just to hormonal imbalance, but even breast cancer.

Note: this is why my periods were so heavy, painful and irregular when I was a vegetarian as a teen.

The processing that soy protein isolate undergoes is also a huge cause for concern.

“Soy protein isolate is not something you can make in your own kitchen. Production takes place in industrial factories where a slurry of soy beans is first mixed with an alkaline solution to remove fiber, then precipitated and separated using an acid wash and, finally, neutralized in an alkaline solution.

Acid washing in aluminum tanks leaches high levels of aluminum into the final product. The resultant curds are spray- dried at high temperatures to produce a high-protein powder.”

To sum up the video:

The rapeseeds are first highly pressurized, forcing out the oil. To extract the last of the oil, the canola cakes undergo a 70-minute wash with a “chemical solvent.” This chemical solvent, my friends, is hexane. A neurotoxin.

Then the oil enters the refining phase, in which the oil is washed with sodium hydroxide, a.k.a. lye. After this, the oil is clearer but still contains waxes.

While it’s true that our bodies need omega-6, it’s in everything.

Fans of canola oil love to tout the omega-3 to omega-6 ratio, but it’s still a lot of omega-6. Plus, the omega-3 found in canola oil isn’t even beneficial (as opposed to omega-3s found in foods like fish).

The omega-3s found in canola oil are ALA, alpha lipoic acid. ALA does not convert well to EPA or DHA, which are the beneficial omega-3s that protect the brain, heart, and heart health.

Don’t confuse this with actual caramel (made of cream and sugar). This substance contains ammonia and sulfites.

You can find caramel color in soft drinks like Coke or Pepsi. Johns Hopkins did a study on the caramel color found in these drinks and determined that it is indeed a carcinogen.

“Soft drink consumers are being exposed to an avoidable and unnecessary cancer risk from an ingredient that is being added to these beverages simply for aesthetic purposes,” says Keeve Nachman, PhD, senior author of the study and director of the Food Production and Public Health Program at the CLF and an assistant professor at the Johns Hopkins Bloomberg School of Public Health “This unnecessary exposure poses a threat to public health and raises questions about the continued use of caramel coloring in soda.”  Source

MSG hides under many names and yeast extract is one of them. MSG is an excitotoxin, i.e. it overstimulates the nervous system.

From The University of Toyama in Japan,

“We previously reported that injection of monosodium glutamate (MSG) in ICR mice leads to the development of significant inflammation, central obesity, and type 2 diabetes. To directly address the long-term consequences of MSG on inflammation, we have performed serial analysis of MSG-injected mice and focused in particular on liver pathology.

By 6 and 12 months of age, all MSG-treated mice developed NAFLD and NASH-like histology, respectively. In particular, the murine steatohepatitis at 12 months was virtually indistinguishable from human NASH. Further, dysplastic nodular lesions were detected in some cases within the fibrotic liver parenchyma.

We submit that MSG treatment of mice induces obesity and diabetes with steatosis and steatohepatitis resembling human NAFLD and NASH with pre-neoplastic lesions. These results take on considerable significance in light of the widespread use of dietary MSG and we suggest that MSG should have its safety profile re-examined and be potentially withdrawn from the food chain.”  Source

This study linked MSG with headaches and increased blood pressure.

Carrageenan is a harmful additive that all but says it’s going to f*ck you up. From The College of Medicine at University of Iowa,

“Although the International Agency for Research on Cancer in 1982 identified sufficient evidence for the carcinogenicity of degraded carrageenan in animals to regard it as posing a carcinogenic risk to humans, carrageenan is still used widely as a thickener, stabilizer, and texturizer in a variety of processed foods prevalent in the Western diet…

And from the Department of Medicine at the University of Illinois at Chicago,

From yet another study,

“…carrageenan was supplied in the drinking fluid at 1.2 and 3% concentrations over two weeks to young adult guinea-pigs. Ulceration of the large bowel was produced in 100% of animals, the severity and extent of damage probably being dose-related.” Source

French researchers performed a study in which they gave rats an oral dose of titanium dioxide for 100 days:

“Their results determined that chronic oral exposure led to a non-malignant stage of carcinogenesis, the process of normal cells becoming cancer cells, in 40 percent of exposed animals.” Source

In addition, other studies have linked inhalation of titanium dioxide to cancer. Why would someone inhale an ingredient in these plant-based burgers? It’s also in paint.

A word on sustainability.

How did we get to this point? To the point where people think that eating a “beyond meat burger” created in a lab, with of toxic ingredients – is sustainable?

Supporting your local farmers. GRASS-FED MEAT IS SUSTAINABLE. There is a relationship between land and animals. They need each other to thrive. Animals feed the land. They nourish it.

When this happens, farmers can grow plenty of nutrient-rich produce.

Furthermore, this process literally builds topsoil, which is necessary for a healthy environment.

Supporting your local farmers ensures that your food isn’t traveling thousands of miles to reach you. Consider the gas, the emissions, the resources used for this Los Angeles based fake meat product to reach someone in Michigan, Louisiana or Washington, DC.

Soy and canola are two of America’s largest scale mono-crops. Farmers grow them on thousands of acres of land doused with pesticides. There are no animals. Soy is not sustainable. 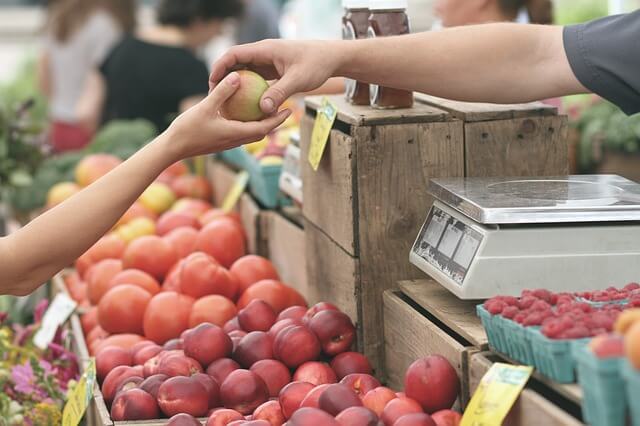 To sum up this Beyond Meat Burger Review: Here is true sustainability:

Buy your food locally, from farmers. Buy food that is in season. Grow a garden in your backyard. Raise chickens. Buy meat and seafood grown responsibly.

Go to the farmers market. Join a buying club. Do not buy man-made food-like products like Beyond Meat. Cook from scratch. Know where your food comes from.

Thanks to Beyond Meat for letting me use their photos. Some paragraphs from studies have been separated to make them easier to read.